If some of you wondered why my spot point didn’t move in the last 24h, here is the explanation. I had a brilliant ride yesterday, saw a lot of Spain. Picos de Europa, Gijon, Santander, Salamanca, the heart of Madrid, Cuenca, Valencia….everything was going extremely well and according to my plan. During my planning, I had spotted that Spain would give more points than the Baltic States or Greece….I had also considered to go to Lisbon, but a careful evaluation revealed that a shorter route through Spain and picking almost all points there was much safer and resulted in more total points. I had informed the family of my lady that I would pass by the centre of Valencia and much to my surprise when I arrived at the town hall, there were 10 people waiting for me to support me and to provide me with food and drinks. Overwhelming! In high spirits I left Valencia and had to pick one point near Castellon and to get to Vinaros where I had reserved a hotel room. The plan was to pick a lots of points along the Catalan coast the lat day and to return already at midnight at the rally finish, maybe even picking some more points near Stuttgart. But when I reached the location near Castellon, the gearbox made heavy noises before it finally died. No more propulsion. The good side: the recovery was quick, I was transferred to Valencia quickly and could stay with my “parents-in-law” and fly back home today.

The frustrating part: I had already a 170000 points and my plan included at least a 213692 points for the total rally…sounds massive. I really hope someone has more points than that or my frustration will be enourmous…my hottest candidate is John Young, as he also found his way to Spain. So it is another DNF in the most important rally in Europe ever. When I was standing with my BMW in the dark in the plantations, I remembered that is was the third time I was waiting for a towing service for my BMW…three more than with all my other bikes….I knew that there must be consequences…and I was so content on that day, everything was running so smooth, a rally of a lifetime, so to say. The bike had just passed the 100.000 km mark and I was happy that it ran so well. But what is a nice performance if in the end you are waiting for a towing truck? Maybe I should look out for Japanese bikes again?

Well, the rally was great fun up to that point and I visited so much iconic and scenic places in such a short time. This was gorgeous and will stay in my memory. Here is my track of the gorgeous leg 2: 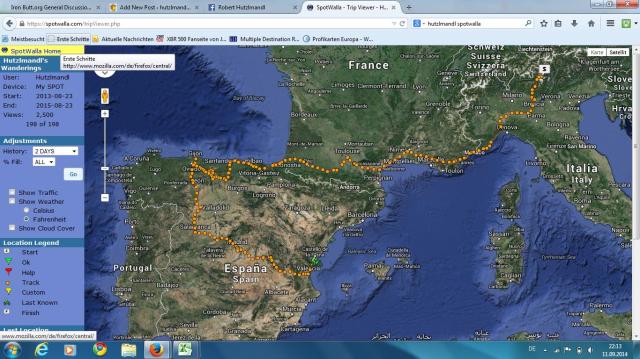 My gorgeous route in leg 2 until my gearbox crashed.

I will try to get to the ceremony tomorrow, although it will be tough, but I owe this to the organisers who did a fantastic job! Thank you for this outstanding rally! It set a standard in Europe!

← First place after first leg!
The king is dead – long live the king! →