Another motorbiking year gone, time to look back. It was a good year with many new impressions. It started with my new bike, the new K1600GT. A true monster bike. There’s plenty of everything. At the end of the year, it has 38.000 km more on the odometer. It could have been more, but more about this later. This is still a good distance, the average biker needs ten years to achieve that. For the first time, I rode quite a lot in winter, enjoying the heated gear.

The first winter trip led me at the end of January (!) to John Young’s bike meeting at his house in Staffordshire. I had never done such a long trip in the middle of winter before, but the heated gear makes winter riding a walk in the park. It was also the start of a series of rides to visit some places as part of the 50-50 Challenge, a 2018 programme to visit many places related to the 50th anniversary of the Triumph Trident triples.

Only three weeks later, I headed over to Britain again, this time with Gerhard and Thomas. The reason was a more serious one: we formed part of the large motorbike group that accompanied Bev Kilner, the late wife of Chris Kilner at her last ride to the crematorium in Aberstwyth in Wales. Bev and Chris had developed some great Brit Butt rallies. 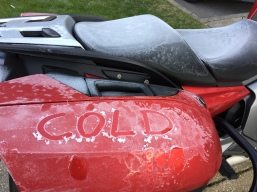 The ride behind the hearse through the sunny Welsh mountains at -1 degrees was unforgettable. I rode to Harwich, took the ferry to Rotterdam and attended the European Ride to Eat. Chilly, but as I said, the heated gear makes riding at the freezing point a piece of cake… 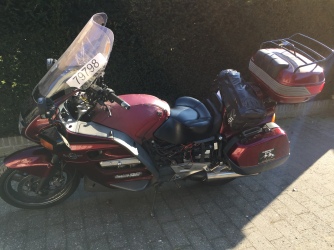 On the 28th of February, my ST1100, the bike that successfully finished the Iron Butt Rally 2017, arrived at home. It had taken James Cargo almost 8 months to return it back to me. Eight months!!! But that’s not all. All my belongings that were still in the panniers were mouldy and rotten. AND: James Cargo had lost my bike registration papers not only once, no, but twice!!! As a consequence, I declined the payment of the transport. My expenses had summed up considerably, not considering the reserve bike I had to buy (K1600GT), hahaha!

I checked the bike and discovered that it was only riding on TWO cylinders…Resistance measurements showed a problem with one ignition coil. When I wanted to exchange them, I found a broken ground cable of the coil. A new cable later, and everything ran fine! No need to change the coils, as the resistance values were within specs. How lucky I was at the Ironbutt Rally 2017 when I ran the last 50 km on only two cylinders and made it to the finishing line! 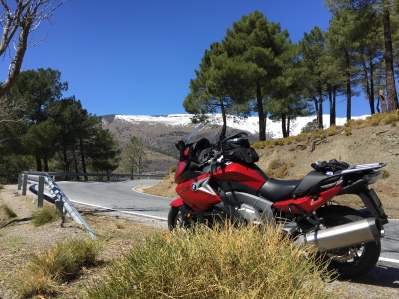 At the end of March, I did a long trip to Andalucía in Spain and could test the K1600 for the first time on proper warm roads. It was a mixture between sporty riding and tourism, visiting Granada, Ronda, Gibraltar and the White Villages. I made another holiday stop in Northern Spain near Soria where it was considerably cooler. A really nice trip to welcome spring.

In April, I received an Emergency call from John Young from Holland: his Triumph Explorer had a problem and he feared he wouldn’t make it home. Without a second of hesitation, I wanted to help him to get back home. Hmmmm….this wasn’t easy…the BMW was at the dealer for a service, the Pan was still not running properly on all four cylinders after the IBR17, the black XBR had a small problem I can’t remember, soooo…..this is an example why you need more than one bike! In the end, the newly re-built cafe racer XBR was the only bike at hand….but it took John to his home place where he took his van and returned to pick up his bike.

In late April, I finished my bike preparation: a new Russell day-long saddle, the Maple platform with my old tourtank in the back, wind deflectors on the handlebars, and the Clearwater ‘converts night-to-day‘ Sevina lights. The bike was in proper rally mode now. I did a first test ride to my hometown in Bavaria and everything worked to my liking.

I went to Viena, from where I repeated the ‘Viena – Hamburg Triple Run’ of May 2nd, 1968. Fifty years ago, the new Triumph Trident managed to do the distance in one high-speed trip, only interrupted by petrol and chain-servicing stops. As I tried to repeat the original ride, I started in Viena at 5:45 a.m., crossed through Munich and arrived in Hamburg at 2 p.m. after 760 km. In 1968, the testers of MOTORRAD had achieved a riding average of 140 km/h. With the Munich traffic, all the speed limits on the A7 and all the road constructions, it was impossible to achieve this. In the end, my average was 138 km/h, this was quite quick under these circumstances, but it demonstrated the exceptional, venturous ride of 1968.

The weekend saw a short ride to a German Ride to Eat at the end of the river Rhine in Holland. The special thing was that I rode two-up! The test of rider, pillion, gear and new bike in preparation for the common holiday trip in summer was considered successful. 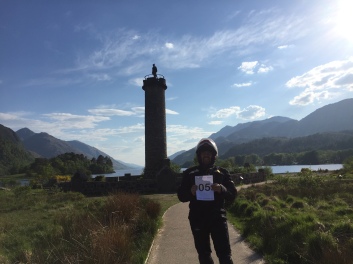 The end of May saw the first rally with the new bike, the Brit Butt Rally 2018. It had a controversial new format, i.e. not claiming points at the end of the rally, but sending the pictures directly by e-mail. Again, apart from finding the best route to get most points, some mathematical puzzle using multipliers had to be applied. The ride was great, the bike performed fantastic, I visited Scotland, mastered a lost flag and found the right spots to take pictures from. 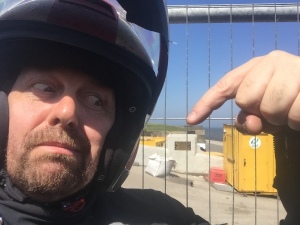 When the rider loses his flag, he has to appear in EVERY picture….

For the forth time in a row, I finished first place. The bike had passed the test. 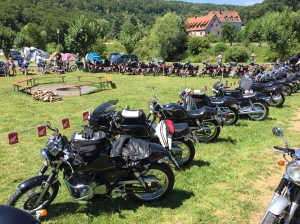 In the beginning of July, I did my only trip with my old XBR this year, the ride to the yearly German XBR/Clubman meeting. On a short trip in the morning, my old buddy Jo was riding in front of me and overlooked a car that ran right into him! Luckily he could avoid the worst and only some light material damages were the result. A close shave!

At the end of July, it was finally time for some big holidays! First, I went with Gerhard to England again to participate in the Brit Butt Light Rally 2018. The last two years, I could not join and the BBL2015 was the last European rally that I couldn’t win…the bike performed well again and although I had some troubles during the rally, I told me not to give up and was rewarded with a first place. I returned home and started the trip to Kirkenes where I met MJ. 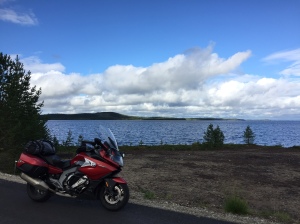 We started a fantastic Hurtigruten cruise from there and explored Western Norway on bike after arriving in Bergen. Really beautiful. Our journey ended in Oslo, from where I rode to Jönköpping where the European Tour 2018 started. After three exciting days, I was declared winner and managed to get home despite some cut-outs of the bike.

The problem came back during the Wolfhound rally. I had planned a winning route, but the cut-outs returned in Dublin, so I had to abandon the rally. I jumped on the ferry to Wales and made it to the house of John with some cut-outs.

He offered me his van to return home the next day. What a generous offer, especially when he had to change his plans and picked up the van himself! So much appreciated. The BMW garage still could not solve the problem and when I just wanted to leave for the German Butt Rally in Austria, the bike stalled again. I received another generous offer, this time from Gerhard. He lent me his new GS1200 Adventure! Wow! I went down to Austria and built an easy route that was worth lots of points. What stroke me later was that nobody else saw this simple and quick route worth of lots of points. So I visited Upper and Lower Austria, Hungary, Croatia, Slovenia, Carinthia and Salzburg. I had lots of time left to spare, but the clever route gave me the fourth and last rally win this year.

As I stayed in my home region, I could do finally a nice trip with my mate Stefan, still on Gerhard’s GS. We visited Austria again and discovered nice roads in Styria that even I didn’t know so far. In fairness, the GS indeed is a nice bike for the Alps, no wonder it won most Alpenmaster trophies by MOTORRAD.

A lighthouse at 2000 m altitute? Only in Switzerland!

At the end of October, it was time for a last long trip: the German Ride to Eat to the Rhine source in Central Switzerland. I tried again the BMW and tested it with my new diagnosis tester: no error recorded. What had the garage done? BMW advised to disconnect and connect the main connector of the central computer ten times. This worked. Strange, but true. All this fuss because of a bad contact in the connector? The answer seems to be “YES!!!”

It wasn’t a motorbiking event, but many biker friends showed up at my big birthday party and covered my with funny presents. Thanks, mates! 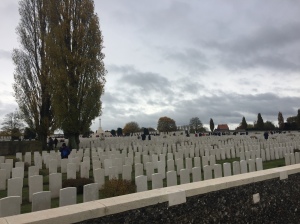 I had invited British, German and Dutch friends to join me one weekend to visit the Flanders Fields around Ypres to commemorate the 100th anniversary of the armistice of World War One. We met on Friday evening and set off on Saturday to visit places like Hill 62, Tyne Cot, Langemarck, Yorkshire trenches and dugouts, Menin Gate and the Flanders Fields Museum.
On Sunday morning 11/11, we met at 11 a.m. at the Pool of Peace to commemorate the end of the slaughter 100 years ago. A very impressive and touching weekend.

Concluding, a very good year indeed. Kept the rubber always down and had no big issues with the bike (excluding a stupid connector). It was a good rallying year, four starts, four first places. Have seen a number of great places, especially in the Nordic countries.

What’s on tap for 2019? Well, definitively less riding with the BMW, it will be a XBR year again. I haven’t done a long journey since 2011 and I had to postpone my next planned trip many times. Next year, it will finally materialise: a trip to Japan on my old XBR. The one that rode the Ironbutt Rally in 2013. A long ride through Siberia and a ride to the XBR’s origins in Japan. I had this trip in mind for more than 10 years, so it’s time to happen. Three years ago, my mate John Young proposed to join in and to do this journey together. We still had to postpone the project twice, but 2019 it’s time making it happen. Stay tuned!