I got up at six in the morning, took the bike out of the parking and parked it in front of the hotel. I was waiting when the breakfast room opened at seven. At 7:25 a.m., I was on the road. I expected it to be a long day, only 665 km, but the tales of the road from Ulan-Ude to Chita are numerous. „The worst road I’ve ever seen“, „horror road“ and other globetrotter statements shock the curious traveller. I rode south, into a dry country. Was this a Mongolian climate already? After a while I turned east. The road was quite all right, maybe the first part was already renovated. I wondered when the bumpy part would start. As I had heard about few petrol stations along the way, I filled up after 130 km. I wanted to order 8 litres and showed eight fingers to the lady at the desk. However, she apparently understood „5.3 litres“. Actually, that was the right volume that fitted into the tank. The landscape was hilly and dry, with small mountain tops. Basically no traffic and a smooth ride. There were green valleys with rivers and floodings. This was quite nice actually. When would the bad part start?

After 270 km, the road got very bumpy. This must be it! Still 380 km to go! There were no holes, but  one bump after the other. I slowed down to 70 km/h to make the ride bearable. After 5 km, this bad part stopped and a perfect new tarmac welcomed me back. I hoped this would last as long as possible….Suddenly I entered a very long construction site…the road turned into an off-road piste! 5 km later it was all rosy again. 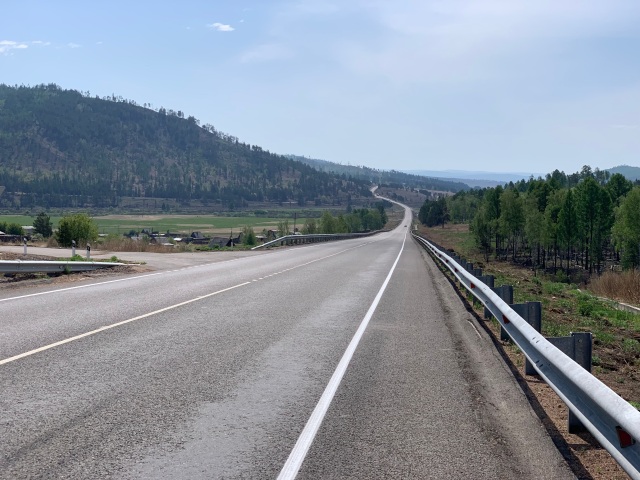 Where is the bumpy road???

After 210 km since the last fuel stop, I stopped at a dodgy petrol station. I ordered more petrol than I needed, just in case…this pump worked accurately, I filled up the tank to the max. This should bring me to Chita. Only 5 minutes later, I was hopping through a 7 km road works section. Bumpy bumpy bumpy….But the XBR has seen worse. The road ascended up to 1000 m and I was thankful for the coolness up there.

I was rewarded with an excellent road afterwards…the wind was blowing strongly from the back and I had to slow down the XBR, it wanted to go fast, fast, fast! Brrrrrr, hold your horses! 120 km/h is enough! I was hot now and this was more than enough. But the XBR seemed to like the ride, it purred like a cat. 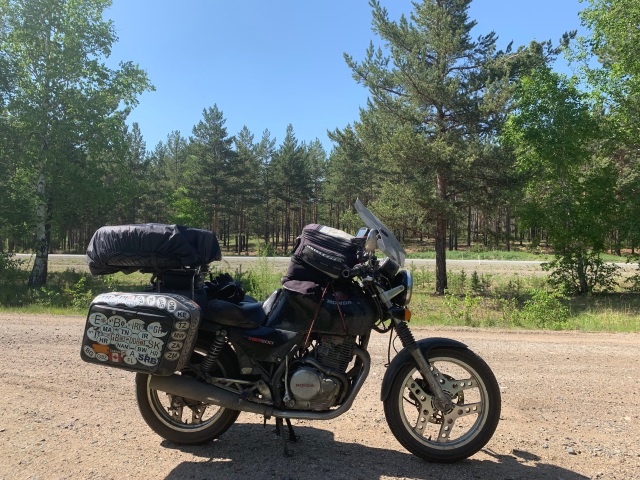 In a good mood today! (and no leaking)

It took several attempts to find a „Mini-Market“ in a petrol station where I could buy some water and a snack. Only two hours to go. The road was fantastic and slowly it occurred to me the notorious horror road has been turned in a quick high speed road between the to cities.

“Why should WE move?”

At 5 p.m., I filled up again in Chita and after a short ride through the city’s rush hour, I arrived at the hotel. Communication at the reception was difficult (no English). I parked the bike underground and walked the incredibly long way to my room. 210 steps, I counted them. That’s about 70 m. Including a ride in an elevator. The restaurant was a bit strange…first, I ended up in the wrong one (closed), it is situated next to the strip club „Roxy“ on the 11th floor. Actually, the Café is downstairs.This is a weird hotel indeed. According to booking.com, it’s the best in town, but I have seen better ones during this trip…

I have booked accommodation for the whole stay in Russia now; in Vladivostok, I could not stay earlier in the booked hotel, apparently a lot of places are booked now and prices (compared to the rest of the country) are very high. If I stick to the new plan, I will even accelerate to plan A -1 day, arriving on Friday night instead Saturday. It is slowly time to have a rest day, so the earlier I get to Vlad, the better. The only night where it was impossible to book something is tomorrow.  There is very little touristic infrastructure in the Amur region. I will try to find a hotel somewhere, maybe in Mogocha, 600 km from here. 9150 km lie behind me, only 2850 km to go!