The best about Hotel Ermak in Sayansk.

During the night, my right lower arm was aching which kept me a bit worrying. I got up early and left the hotel as soon as possible. The receptionist was as grumpy as yesterday. When I was about to take off, I read a message from Johannes about the carburettor spring, it can be changed to a softer position. I remembered this vaguely, but it was too late now, I was about to start. At a quarter to seven I left the parking. It was sunny and quite mild, probably another nice day was in front of me. At first, the road to Irkutsk was quite good, but then the unavoidable road works started. At least it was dry. Today, there would be to time zone change and the sat nav indicated an arrival time of 14:15! Well, I knew this would not be true, there would be road works, fuel stops and and and and….I estimated 5 p.m. But even this would be fantastic, the earliest arrival on the whole trip so far. My hand started to ache again. A cruise control would be nice now….But then then I had a fantastic idea, the best idea of the whole day: some days ago, I had spotted in one of the side bags of the tank bag a tool that was lying there since….the Ironbutt Rally 2013? It is called a “cramp buster” aka “throttle rocker” and helps to relieve the force on the throttle hand. You’re basically pulling the cable by the weight of your hand. No more pain the whole day, fantastic!

So I took the time and stopped for the first time at a works section. This picture shows and average construction site with the typical groves  and some gravel. Real bad ones would consist only of coarse gravel.

I made good progress and soon I had to fill up near Irkutsk. I had a little second breakfast and even the possibility to check the tyre pressure: everything still ok! I took the road to the west and slowly the road ascended towards some mountains. I realised that I had switched from plan B to plan A now! In my initial plan, John and I would have started in the morning from Listvyanka at the Lake Baikal shore and passed here at the same time. After one week, I had caught up the lost day resulting from the disastrous border crossing one week ago. Excellent. The road went over a pass of 999 m altitude before it descended again. Finally I spotted the great landmark of this trip: the Baikal Lake.

I descended to the lake and was surprised by the temperature drop of 10 degrees! I was fresh down here, only about 12 degrees. I rode along the southern shore now and I expected to find a certain touristic infrastructure, with some cheesy souvenir shops where I could purchase a sticker for my panniers. Nothing could be farther from reality. Along the whole shore, I couldn’t spot anything that could be related with trapping tourists….any tourist. I crossed the town of Baikalsk, where I found at least some nice motives:

Comrade Wladimir Iljitsch. The only statue I saw so far in Russia. And this one was rather in a back yard.

It was difficult to get a clear shot on the lake and apparently the lake shore was not as important to the locals as in Europe. I took a decision to make a turn and enter a town where there was access to the lake. Finally I got to the shore and asked a Russian to take a picture of me. I learned a new Russian word today: “откуда (atkuda)?” meaning “from where?” My response is “Бельгия! (Belgium)” 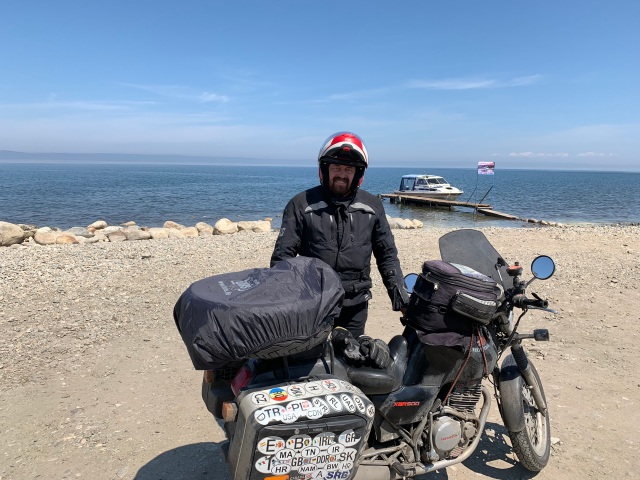 Soon it was time to fill up again. It was a rather dodgy station with only two pumps and no tarmac. But stations got more and more rare at the south side of the lake. I ordered 13 litres (which was in principle too much)….and the tank was not full at all! Did I make a calculation error? I ordered another four litres….and the tank was not full! I started to worry….yes, the carb was leaking again, but had I really lost so much petrol during riding??? During the next hours, I was concerned about the leaking carb….I was still in a safe zone, but in the next days, petrol pumps will be rare. I stopped 130 km later again and filled 9 litres again…still not full! But then I started calculating….the only explanation was that both stations (Rosneft) had non-calibrated pumps that delivered less petrol than indicated. The 17 litres at the first station should have clearly overfilled by tank….but they didn’t. Cheaters!

The roads were sometimes excellent, sometimes horrible, and everything in between. Roads works came back. Suddenly I was stopped by the police. For the first time in Russia, I saw a cop with a speed gun! Uh-oh! He showed me that I had been riding at 97 km/h….so? He told me many things and then showed me “5”. “500?” I replied. He called his colleague and both of them tried to explain me the penalty. In the end I understood “5000”.

I laughed humbly. You’re joking, right? Ok, here we go….I took out my fake wallet with many bills of little value. Look, I only have….1500 Rubles….They gave in and typed “1000” on their phone. Deal! And off I went.

When I left the shore of the Baikal, the temperature rose immediately from 16 degrees to 26 degrees. Wow! So the lake acts a an enormous fridge in summer. At the second petrol stop I saw a young girl asking the clerk what braking fluid she should take. I indicated: “it’s either DOT 3 OR DOT4, don’t mix!” Outside, the girl was talking on the phone, otherwise I would have tried to explain that topping up braking fluid will not revolve her problem, whatever the problem was.

Towards Ulan-Ude. Another train.

I was getting hot now and the vegetation changed as well. At the entrance of the big town Ulan-Ude I filled up again. Now I could see that everything was all right with the XBR, the two petrol stations were simply cheaters.

My humble room. I can jump half night on one bed, and then change to the other.

I activated my mobile phone navigagtion to the hotel and at 5 minutes to five, I arrived at the Mergen Hotel. A plush five star bunker with all amenities for the price of a modest single room in Europe. The next days will be shorter and the accommodation will be very simple. I had a shower and washed my riding gear. For the first time in the whole trip, I could relax for an hour on the bed. What a luxury. 8400 km. Eleven days. Like the Ironbutt Rally that will start in a few days. At least the distances will be shorter now.

OMG! I left my beauty case at home!

Tomorrow will be a hard time, the road is notoriously bad and I expect a long day.

I visited the restaurant and chose some local specialities. Ulan-Ude is the capital of the Burjatian Republic and there is quite some Mongolian influence here. I ordered a fish soup with delicious fish from the Baikal, and, English ladies and gentlemen, please grab your chairs, Mongolian horse stew. Excellent.

I have some time to plan the next days. The most tricky thing will be to find accommodation after Chita where I will be staying tomorrow. But something will show up.