I kind of overslept this morning, but this was not a problem. I had found out that a rain front would pass by so the later I would leave, the less rain I would see. This guess turned out to be correct. I had a spectacular breakfast (no picture) and left only at 9:15. I was prepared and had put on the inner liners. Temperature was 20 degrees as I continued my ride on the E4. One hour later I crossed the border to Finland and got aware that the sat nav switched one hour forward. I though that the people along the border must have a ball on new year’s eve: they welcome the new year in Finland, walk over to Sweden and repeat this one hour later. I took the E75 to the north and rolled through Finnish landscape. 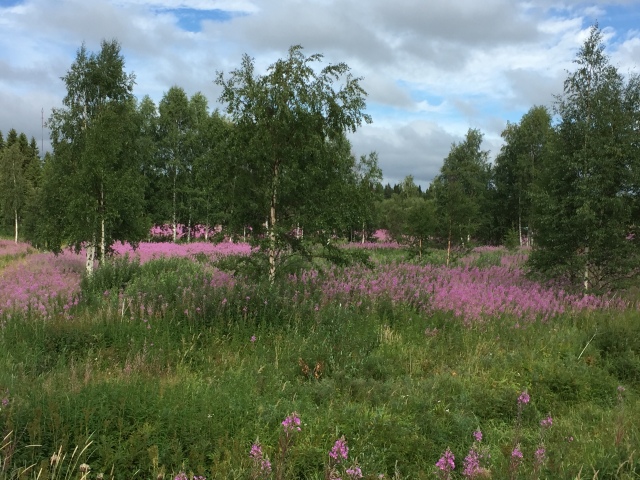 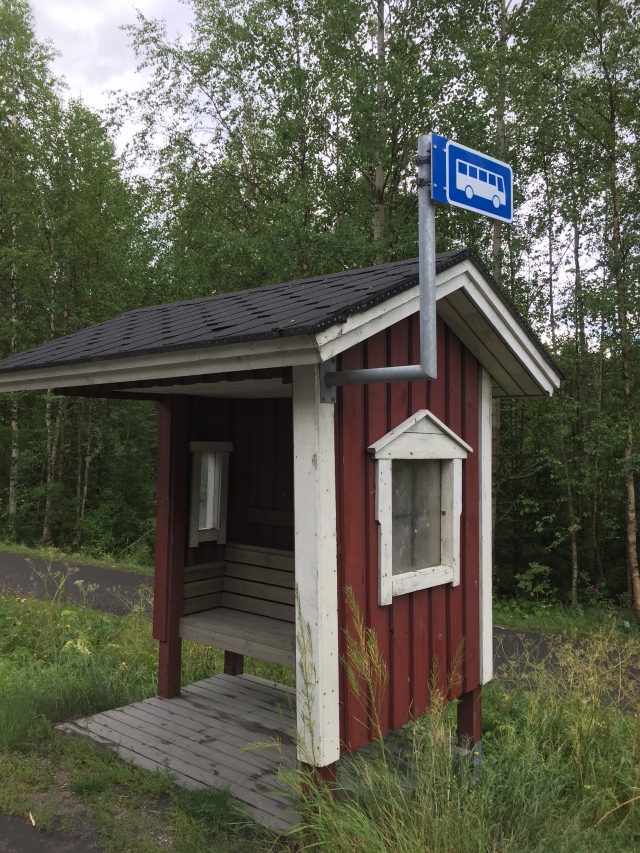 Soon I had to fill up and continued. I reached the city of Rovaniemi that appeared much bigger since the last time I passed by (25 years ago). Then I found the place where Santa resides (at least as claimed by the locals): 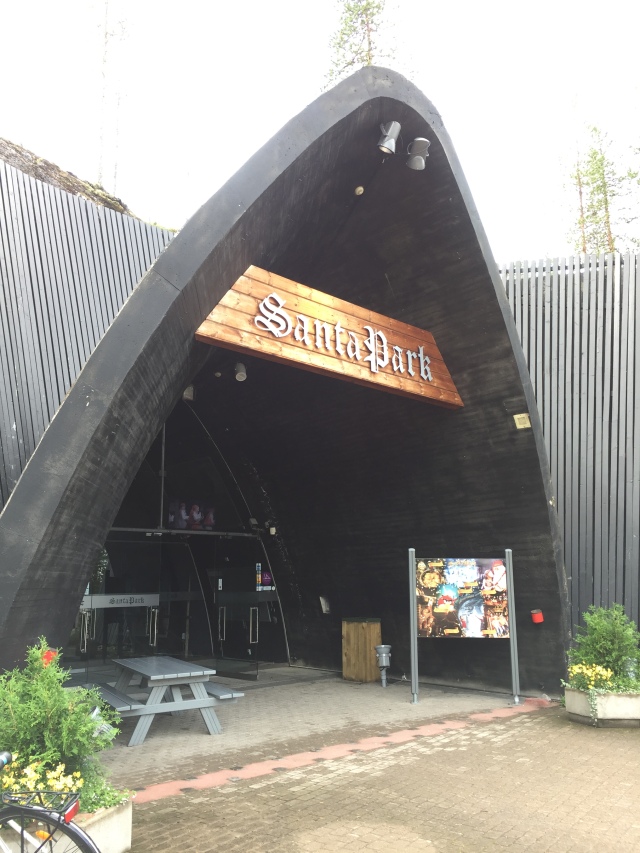 I have discovered Santa’s stash! It’s well hidden in a mountain.

Soon after I reached the Arctic Circle. I remembered a memorial there, together with some houses. I think it was also one of the few places on that seven week trip where I afforded a hot meal. I had my first reindeer goulash, how can I forget that. Well, I was a poor student then. You can imagine my surprise when I found no polar circle memorial, but an enormous complex with dozens of shops, restaurants, entertainment, etc…

Horrified, I fled from this place. I continued my ride through rural Finland. Soon after, I had to stop as a big reindeer was quietly walking in the middle of the road. Big antlers! In Sodankylä I wanted to stop for lunch, but the restaurants did not look very appealing and due to the Eastern time it was already quite late. In the end I had a shabby kebab in a shabby restaurant in a shabby petrol station. You could also buy repair sets for car exhausts there. Or fish hooks. Authentic.

I went on and after two hours, I decided to stop for a last petrol fill in Ivalo at the south shore of the Lake Inari. I decided to put on some extra T-shirts for the temperature had dropped to some 14 degrees. Soon after, the best part of the ride began on that day began: the road had bends and suddenly the sun appeared! Instead a dull ride under cloudy skies, this was really impressive now. 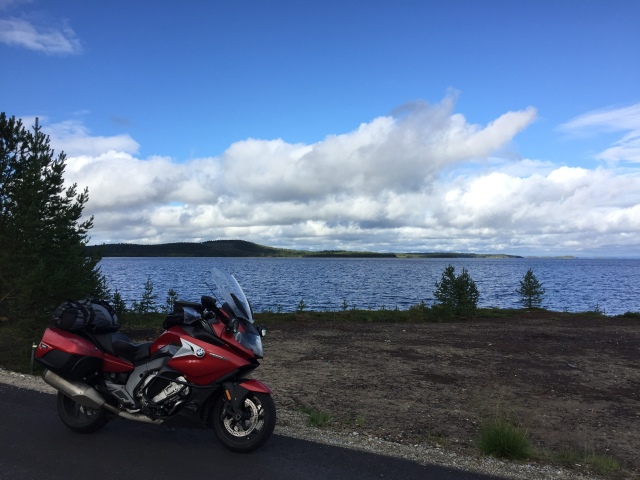 Inari Lake. I was immediately surrounded by blood-thirsty mosquitos.

The large Inari Lake to the right, the sun to the left and thousands of little lakes or ponds everywhere. This was spectacular.

I still had 200 km to go and when I turned from the E75 to the direction of Kirkenes. I hadn’t seen a policeman the whole trip, so why would there be any on this last stretch to the Norwegian border? I switch the suspension to “Dynamic” and let the horses free. This was fun! Of course, you had to scan the horizon for reindeers.

This guy just walked over the road as if he would own the place!….well, I guess he does…

I arrived at the border and from now on, I slowed down considerably. Norwegian speed controls are notorious. I was riding down to the coast and when I hit the E6, I passed the Neiden waterfalls.

The last 44 km to Kirkenes where bathed in sunlight again and quite beautiful. After a certain point, many boards announced that taking pictures was forbidden for military reasons. Actually, this region used to be the only place apart from Turkey where NATO and the Soviet Union shared a common border.

At 18:30, I met MJ in the hotel in Kirkenes. The 770 km went faster than expected. I looked for an ATM to get some Norwegian money and gave the BMW a good wash. After a quick shower we went to the hotel restaurant and were whacked in the face by reality. You know that Norway is expensive, but when you’re sitting in an ordinary hotel restaurant and looking at the menu, staring, sweating and hyperventilating, you know you have finally arrived there. However we decided that we live only once and that the numbers on the menu are not real. We chatted with the Spanish waiter and enjoyed our dinner, grilled salmon. We had not chosen for the local speciality: king crab. The next time after I have successfully robbed a bank, I will order one.

We chatted with a Bavarian couple at the bike outside for a while and did a little walk through the town. This was very quick as the town is….not so big.

Time for a night rest!

The next morning we left the hotel and rode 1 km to the pier where the MS Midnatsol was already waiting for us.

We checked in immediately and after one hour of waiting time, I could finally ride the BMW on board. We investigated the ship for a while. It is the usual postal ship that runs the same route for decades, every day.

It’s also a cruise ship, albeit not a luxury one. Easy going. We soon enjoyed the buffet lunch and had a relaxed afternoon. Soon we visited the first stopover on the boat trip, Vardø, the most Eastern town of Norway. We only had 30 minutes on land which meant we could not visit the witch hunt memorial. It is an impressive memorial for all the women that were burnt as “witches” in the 16th and 17th century. Compared to other places in Norway, the death toll was highest here: Out of 3000 inhabitants by that time, 91 were burnt at the stake. We visited the old fortress instead where two guys dressed as soldiers ripped off tourists by selling them entrance tickets. Funny.

The fortress on Vardø island. 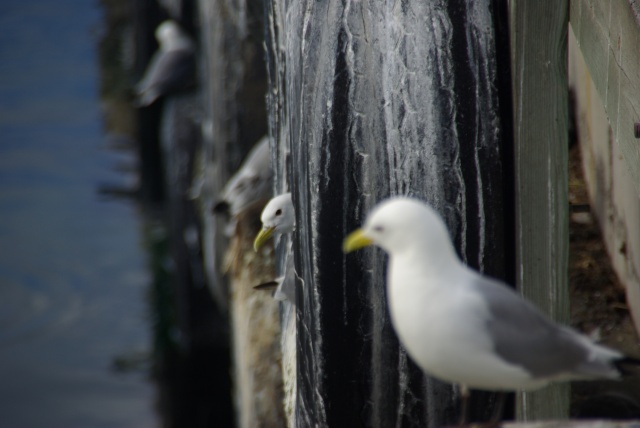 The moment the ship horn sounded…panic!!!

When we returned on the ship, we noticed a sign “upgrade your cabin to a suite” with a big number (representing Norwegian crowns) next to it. They haven’t filled them, so they offered the upgrade for a fraction of the normal price. Naaah, too much money. But MJ had asked already if we could look at them. Yeah, what can I say. When we stood in the room, I knew that the decision was taken. What did we say? You only live once? Absolutely.

So know I’m sitting next to our enormous window in our enormous room watching the coastline drifting by. This is gorgeous. 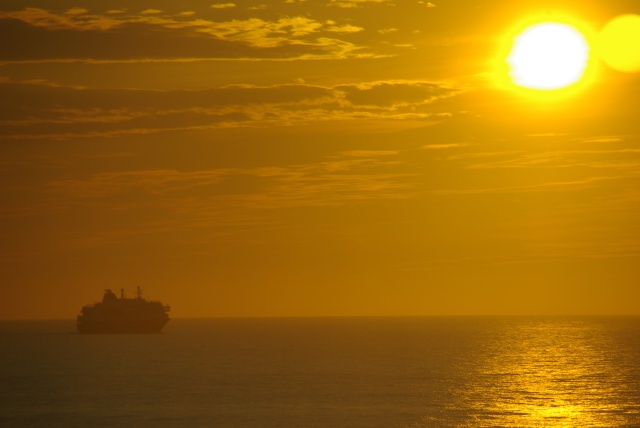 I had planned to take pictures of the midnight sun, but just like 25 years ago, some clouds on the horizon seem to foil this plan. 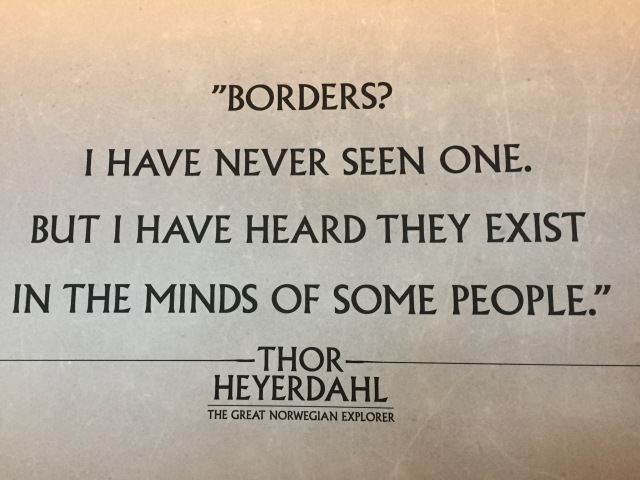