The Long Ride to Japan – Day 26 – A sort of homecoming

This morning, something unusual happened: I overslept. That means, I woke up after seven o’clock. But why rush it. Now I’m in vacation mode. During breakfast (again a large buffet selection), I got some news with problems of my airbnb guest back at my home place. That needed immediate response and kept me busy for a while. And the keys of the mobile phone keyboard seem to get smaller and smaller. In the end I left the hotel only at 9 a.m. I opted for the (expensive) urban expressway, but it would take me out of the city quickly. I was heading south, in beautiful sunshine. The trip’s highlight was only 100 km away – the Kumamoto Honda factory where the XBR was built in 1985.

This was one objective of this trip, seeing the place where the XBR came from. In the past weeks and months I had tried to establish contact – but I couldn’t. The respective websites are in Japanese. There is a ‘homecoming” event in October and I wrote a message to the e-mail address – no response. I wrote a message to Honda Germany – no response. I called Honda Germany with two questions: where was the XBR built and how to establish contact. I received a message back: we are sorry, this information is not known to us. “Are you really telling me’ I wrote back, ‘that Honda does not know where its motorbikes were produced?’. A while later, I got another message: ‘the motorbike was built in Kumamoto’. ‘Yes, thank you very much, and is there a way to establish contact the factory? I’d like to visit it.’ Silence. Roaring silence.

Some two weeks ago when I was in Russia, I discovered that a lady offered tours through the factory via airbnb. I contacted her. She explained to me that the information was only available in Japanese and reservations had to be made at least one month in advance in Japanese via fax or letter. Impossible for foreigners, that’s why she offered this tour. She contacted the factory, but no free places were available anymore. I nevertheless wanted to give it a try, maybe there is a way…. 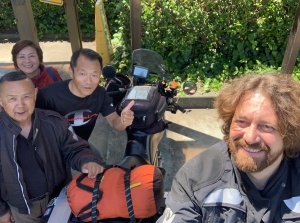 I stopped at a rest area and wanted to buy something to drink. I stopped next to three Caterham Super Seven and an old Mini Cooper. The owners were curious and started a chat….you know…from where, how, when…I revealed the facts bit by bit (the itinerary, the bike’s mileage, the concept) and they were more and more impressed. When I told them I did Hiroshima to Fukuoka yesterday (300 km), they were impressed as well. So you can imagine how a 13.000 km long trip must sound to them. They were really nice people and we had a good laugh. I had a look at their British cars as well, that’s not something you would expect here. Finally we said good bye and I started the final approach to Kumamoto.

I had no trouble getting to the factory, and there it was, THE sign to be photographed. I approached the entrance, parked the bike and walked to the security booth.

The security guy did not speak English, but another man in a Honda suit asked ‘reservation?’ I denied. I explained that I’d come a long way from Europe. ‘Yes, I know’ he said. No chance. The last hope vanished with a puff. Ok, I had at least tried it.

What’s next? It was later than expected, but at least I had more time for the second highlight of the day: the Mount Aso volcano. I introduced a GPS waypoint and set off. 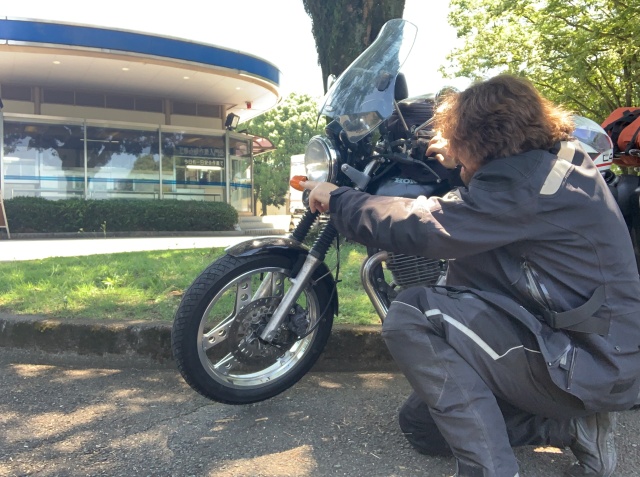 “Look, that’s where you came from!”

This was disappointing, of course. It would have been great to enter the site, at least out of curiosity. But it was not the guard’s fault. Kumamoto is one of many production sites and the guards have clear instructions – entry only with a reservation. They are just doing their job. But I felt I was mad at Honda Germany – their customer relation management is despicable! When I bought my XBR, Honda was market leader for many years. Now it’s rank three to five with only half the market share than BMW. Coincidence? BMW has the less reliable products, but excellent after market management. I think I’ll have to write a “nice” letter to them when I’m back home.

I rode on back roads through a green landscape – rice fields, grass land, fields, trees – and soon I spotted large mountains on the horizon. I got closer and closer to Mount Aso, the mighty, largest active volcano in Japan. The views got more and more scenic and suddenly I realised I was going downhill again – this was the ridge of the large caldera. As I learned later, the caldera of this ancient super volcano is 25 km long and 18 km wide! And this is only the part that collapsed. My next destination was the mountain road to the active crater. But what was this? A German flag?? “Holahoo”? A German looking house with a German flag? Hm, I was behind my plan, but this looks interesting….Let’s check this out! I entered the frame house in German style – so this was a Café…

I greeted the lady in German, but she didn’t speak it. English went quite well. The next hour was making a very nice and lovely acquaintance with a family that dedicated their life to German products. The couple told me that they are travelling every year to Germany for 15 years already, mainly to Seiffen in the Erzgebirge. It is known for its wooden figurines, mainly produced by turning. In Germany, the objects are mainly sold in Christmas markets.

They sell a lot of these products plus served German coffee and….Baumkuchen! An old German speciality that you can rarely find for it is very time-consuming to make. They make it on their own and of course I had to try it. Delicious! Everything in this place was carefully selected, this was no tourist trap, only good quality items. Of course I told them where I was from and in the end we were watching promotional videos from my beautiful home area on the large TV. This was almost surreal. We had great fun in sharing stories. 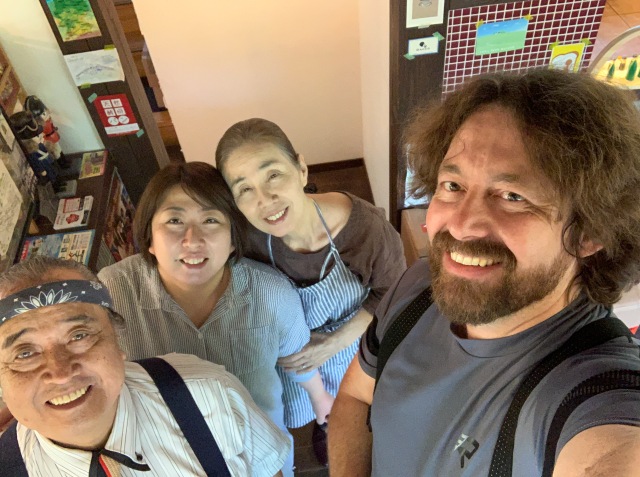 When I told them about my trip, they were more and more amazed. Really very nice people!

I had to say farewell and when I left the parking, waiting at the road for the cars to pass by….I saw the three Super Sevens plus the Mini pass by into the other direction! What a funny coincidence! It took a while until I could stop laughing.

I got closer and closer to the volcano. The routing of the GPS in Japan is not brilliant, the sat nav always wants to take the direct route. I ignored it and had to find out that it had shown me the right way. It paid my foolishness with 5 km extra single track roads in the forest. Finally I was on the ascent to the crater. The XBR felt mountain air – that’s what she likes! The views were more and more scenic – often you can’t really put it in a picture – even in panoramic mode you can’t reproduce the ‘depth’ of the visual impression….wherever you look, there’s the caldera ridge.

Finally I was at the junction to the top – but soon I had to stop. The toll road to the crater was closed! I had seen some smoke before and there was this helicopter in the air. Apparently, the volcano is waking up and it is too dangerous at the moment to get closer than 1 km.

Well, then let’s be a good tourist and go souvenir hunting! I purchased a small Kumamon, the happy bear from Kumamoto!

These are too big, I guess.

A riding couple. The colour on the picture is not the true one. In reality, this colour kills cells on your retina.

I walked outside and had another nice talk with a biking couple, she was riding a very pink bike! I mean, pinky-pinkish pink. Or just PINK!!! I see that the information about my trip sinks in when I show the GPS track, the eyes go wide.

A few km down the road, I visited the Mount Aso Volcanic Museum. Not hyper modern, but sufficiently informative to be appropriately amazed about the formation of this huge volcano. This must have been a really big BANG then! The pyroclastic streams covered a large part of the island of Kyushu! 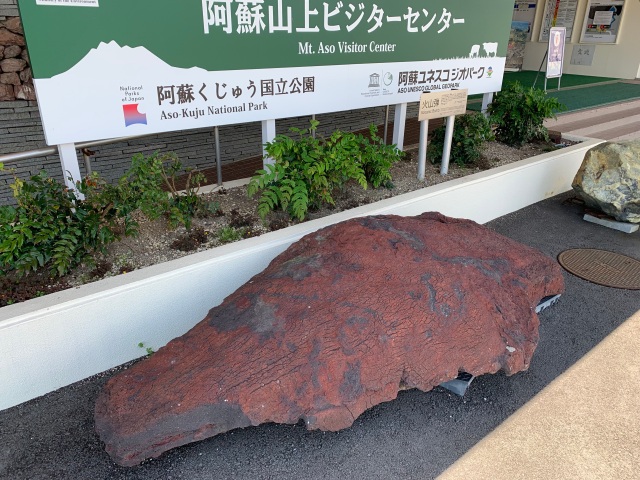 This is a ‘volcanic bomb’, i.e. the debris during an eruption!

The caldera on a map 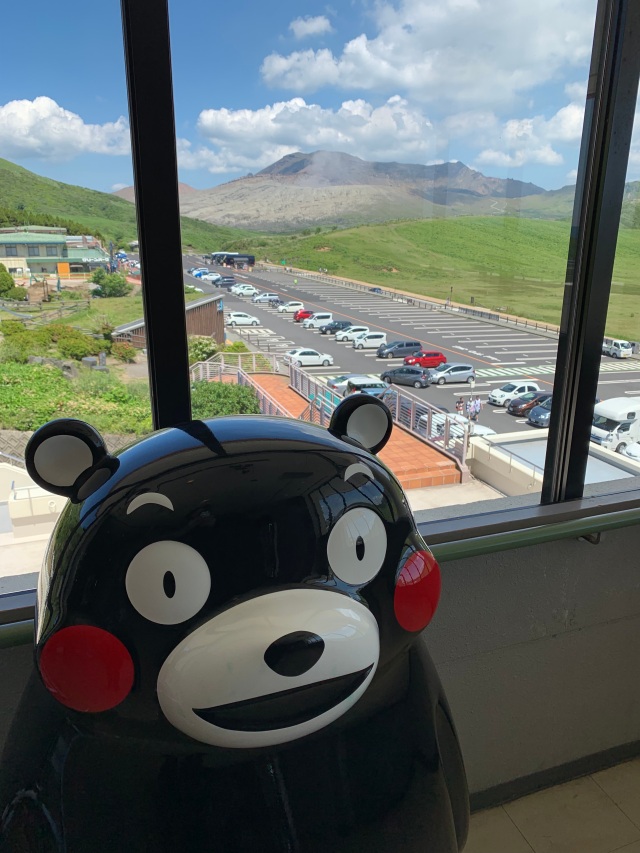 I still had less pressure to arrive at my ryokan before five o’clock. The views down to the bottom of the caldera were spectacular again. Fantastic.

And from the bottom of the caldera, up to the ridge again. I followed some bikers on a nice, winding roads. But…they could go …a bit faster. I noticed that changing the spark plug was the right thing to do, but the bike still felt like running too rich. What could this be? Classic diagnosis procedure: what needs a combustion engine? Fuel, spark and – air. Maybe I should check the air filter. 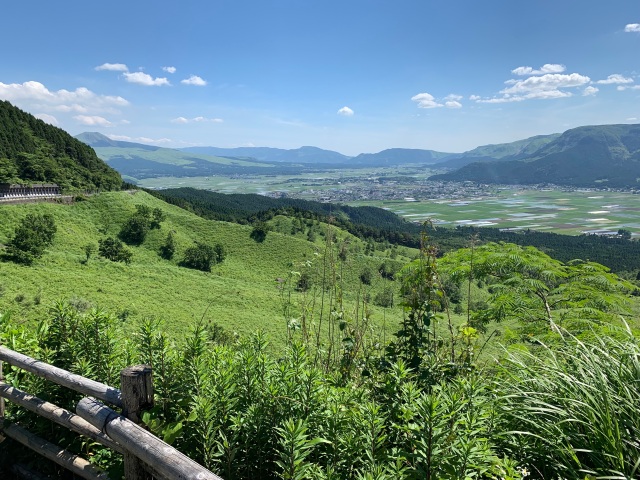 I passed the ridge with a beautiful look back and sooner than expected, I arrived at my ryokan, a traditional guest houst with its own onsen (spa). I checked in and was first shown around, when I came back to my room, my luggage was already there.

I went back to the bike and had a look at the air filter….indeed, it’s very dirty. Normally, I would have carried a spare one, but I left it at home when I reduced my luggage. As the filter is symmetrical, I turned it around, this should help a bit. I guess it is possible in this country to find a new filter for this bike. I mean, where else, if not here? 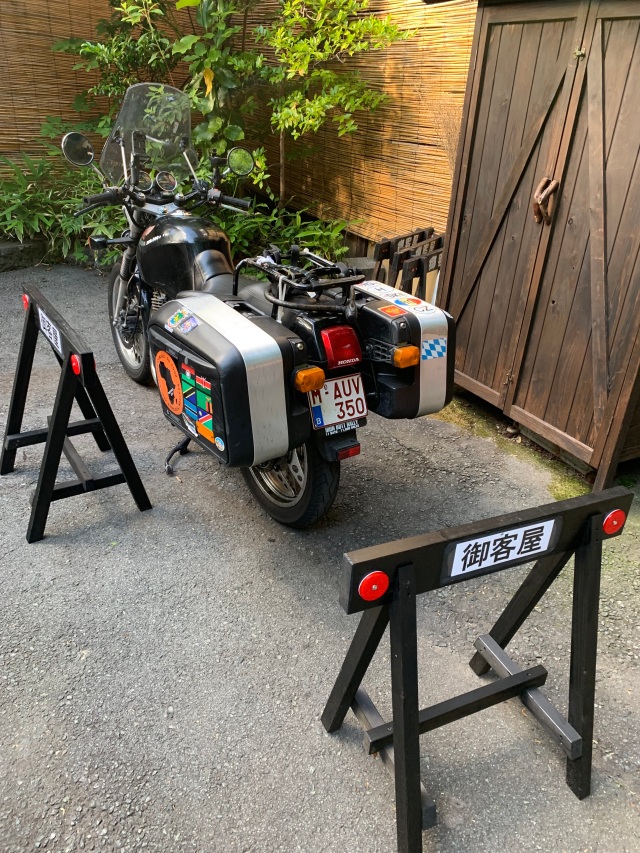 My ryokan. You can see the path to the outdoor pool.

So I jumped in my Yukata and went to the bath (my bathroom has only a toilet). I tried first the small bath (after a thorough cleasing, of course), then I changed to the outdoor stone pool, next to the river. Ahhhh….relaxing…After that, I put on the jacket, changed slippers and toddled through the village, like many other visitors in town. It was a nice walk before dinner, very orexigenic. 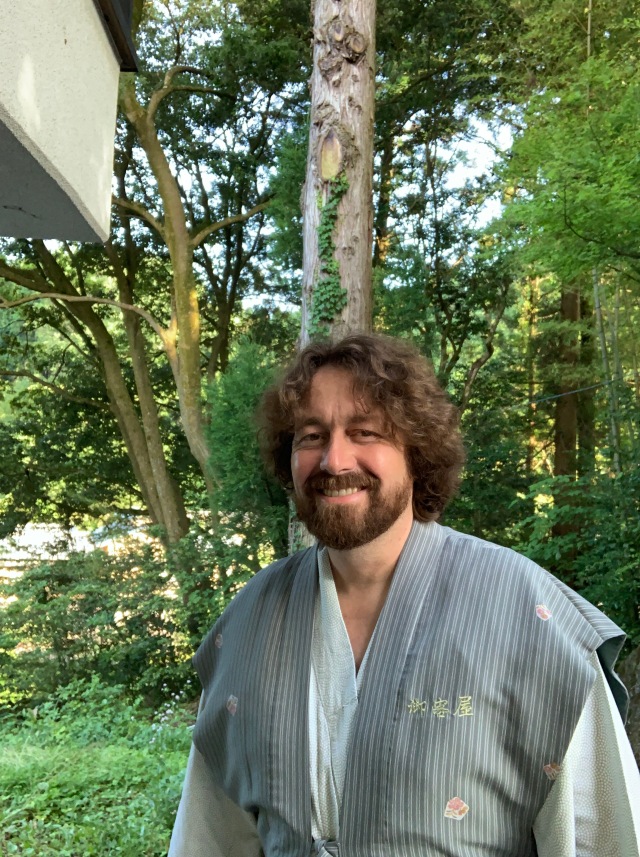 Dinner was served in my room. As I was alone, I could stretch my legs under my table. I don’t know how I could do this, kneeling all the time. Then the food was served by very nice guy….dish by dish…and everything was excellent! I never had raw horse meat before, but it was fantastic. Classic top Japanese cuisine. 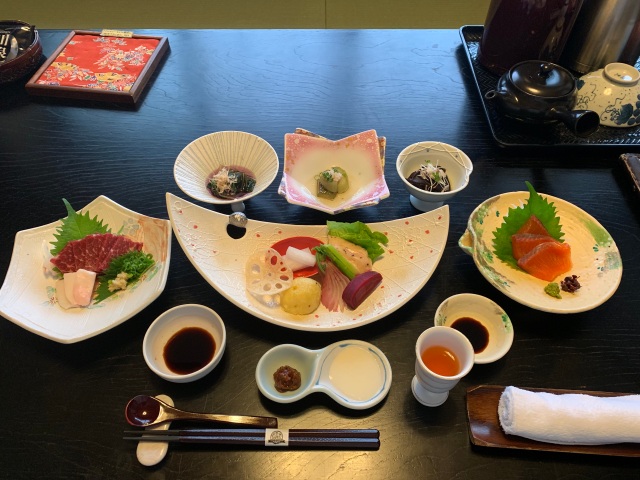 When I had finished, my futon was rolled out and prepared for the night. I ordered a Japanese whisky that was filled very generously. 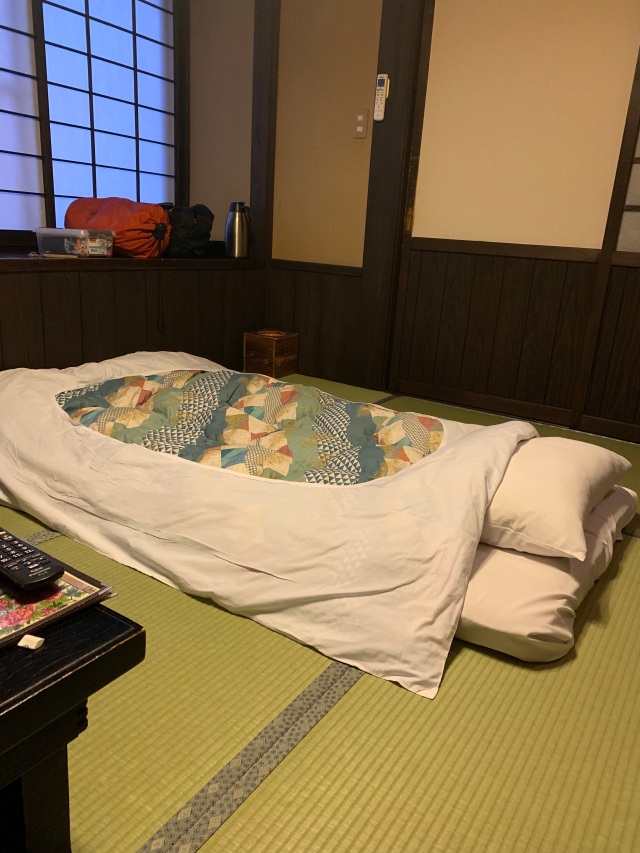 Tomorrow will be the last sunny day – everybody, including the forecast, tells me that the rainy season will hit later. I have a plan for tomorrow, but to escape the rain – almost impossible. I’ll need a good plan.