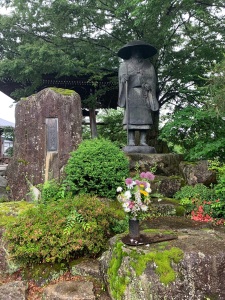 After another sumptuous breakfast, I prepared my luggage. Everybody of the staff asked me if the motorbike was ok. Yesterday, I thought it was a good idea to place the jacket in the shelter of the XBR for drying – but it wasn’t. The humidity was so high that the jacket was still damp. It paid my bill, grabbed an umbrella and walked round in the town of Hida. This ryokan was really outstanding, very welcoming staff, good facilities and fantastic food.

It was raining a bit, so I returned soon to the ryokan and set off with the XBR. The Garmin proposed a different route than I had expected, a more direct route over the mountains. Well, I had lots of time, I thought, why not. After 15 minutes, it stopped raining, maybe this route was not so bad! But half an hour later, I was stopped by a big, closed gate. I seemed to be a closure for winter, but maybe something had happened up there. I turned around and remembered that the alternative route I had seen in the valley below was also closed.

Luckily, there was a little detour and I could continue my ride to the West. There was no traffic, roads were ok, mountains were covered in clouds and I was riding next to a long barrier lake. This was not so bad! The deep green water was totally quiet and lay there like a mirror. My sat nav however, brought me the news that I had to do a 40 km detour, as I had to get to the entry of the highway going south. There was no other possibility to go north. But as I said, I had a lot of time, today’s itinerary was very short and there was only one (or several) planned stop to visit some old houses along the way.

These houses form part of the common UNESCO world heritage of the Historic Villages of Shirakawa-go and Gokayama. Located in a mountainous region that was cut off from the rest of the world for a long period of time, these villages with their Gassho-style houses subsisted on the cultivation of mulberry trees and the rearing of silkworms. The large houses with their steeply pitched thatched roofs are the only examples of their kind in Japan. Despite economic upheavals, the villages of Ogimachi, Ainokura and Suganuma are outstanding examples of a traditional way of life perfectly adapted to the environment and people’s social and economic circumstances.

It started to rain again, I got nicely soaked. But when I reached my first stop in Shirakawa-go, the rain had stopped and would not return the whole day. A sensation of dampness remained though. I parked the bike and noticed immediately that this was a touristic place. Loads of tour coaches, lots of people. I noticed that I stayed away from mass tourism since the Red Square in Moscow. Not my cup of tea. I visited the Folk Museum where some typical Gass-ho houses with their typical thatched roofs were located. 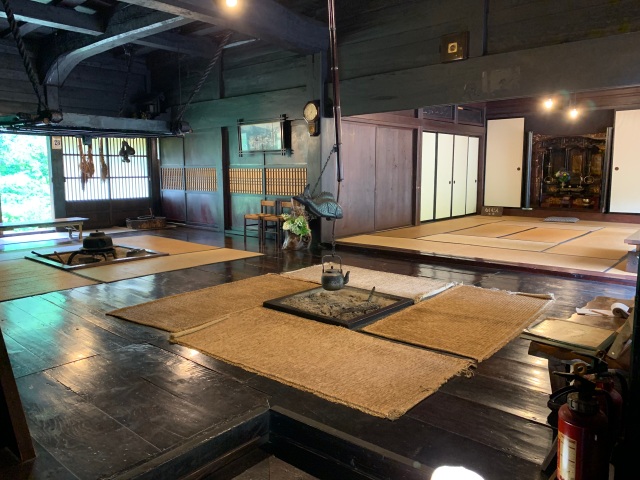 Interior of a exclusive Gass-ho house. This was not an ordinary farmer’s house.

Some signs leave you a bit clueless.

The Gassho-style houses found in the Historic Villages of Shirakawa-go and Gokayama are rare examples of their kind in Japan. Located in a river valley surrounded by the rugged high-mountain Chubu region of central Japan, these three villages were remote and isolated, and access to the area was difficult for a long period of time. The inscribed property comprises the villages of “Ogimachi” in the Shirakawa-go region, and “Ainokura” and “Suganuma” in the Gokayama region, all situated along the Sho River in Gifu and Toyama Prefectures. In response to the geographical and social background, a specific housing type evolved: rare examples of Gassho-style houses, a unique farmhouse style that makes use of highly rational structural systems evolved to adapt to the natural environment and site-specific social and economic circumstances in particular the cultivation of mulberry trees and the rearing of silkworms. The large houses have steeply-pitched thatched roofs and have been preserved in groups, many with their original outbuildings which permit the associated landscapes to remain intact.

I walked around in the village where many international tourists stumbled around. I had already noticed that many Chinese tourists visit this area in the mountains.

The village was nice, but let’s move on. Some 25 km down the road I stopped at Suganuma and I am glad I did not miss it (almost I did). What a contrast! Only a very small village, but precious! Embedded in the surrounding mountains, it appears as a little gemstone between the mountains. And there  were only fey tourists. No busloads.

I visited a small museum in a Gass-ho house that had typical items on display that were used by the people in this region. Household items (no Hondas, John), silk production, farming tools. 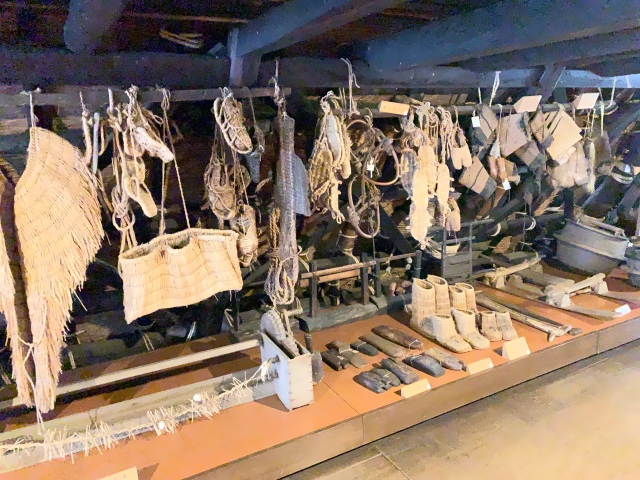 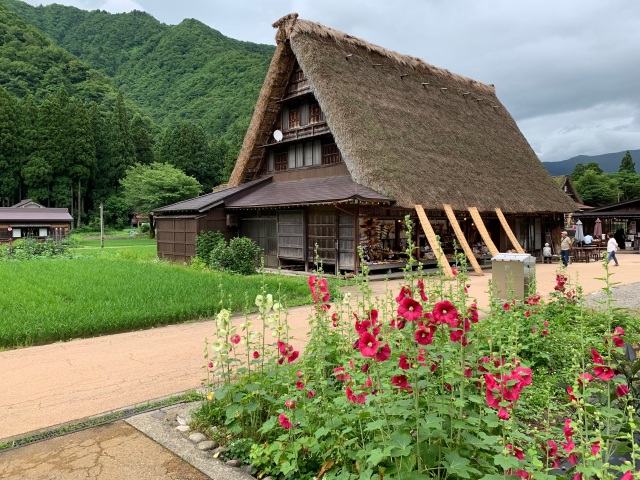 A now even the sun was shining! I was glad to have developed this ‘cunning plan’, it really seems to work. If this is the rainy season, I can live with it.

Only after 8 km, the last of the three world heritage villages was waiting for me: Ainokura. Like Suganuma, it is a small village where actually people do live. There is an occasional shop or a small restaurant, but that’s it. I walked around between the houses, admiring the thatched roofs that are almost one metre in thickness. 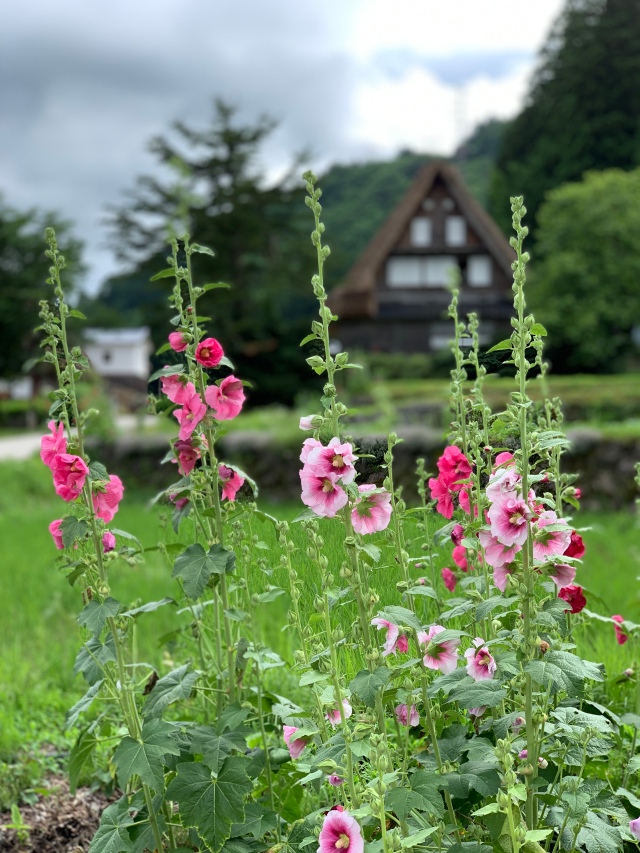 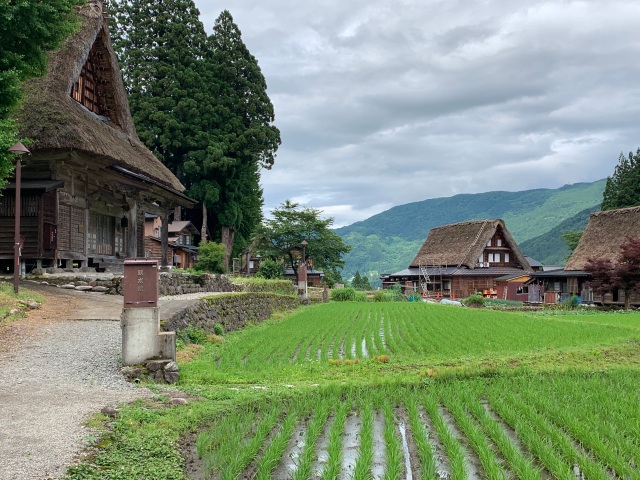 I had a little snack in a little shop and decided to visit a papermaker. They make hand-made artistic paper there, really beautiful work. But nothing of it would survive five minutes in my panniers. So I bought two nice paper covers for chopsticks. I chatted with the owner and when I had revealed my trip to him, he was laughing and shouting “crazy! crazy!” He also took a picture of me, saying that would be for his facebook page.

I walked back to the bike. I only had another 25 km to go to the ryokan. What a relaxing ride today! But in the end it turned out a very beautiful day, and the historic villages are really stunning. I went on the National Route 156 that follows the Sho River. Some marvellous views there.

Traffic at roadworks is controlled with flags: red for stop, white for Go! 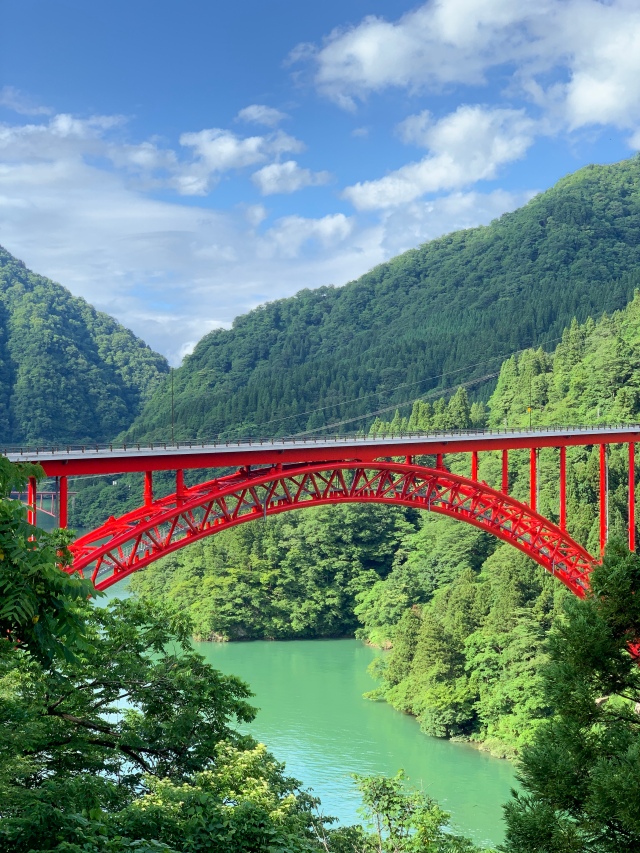 Japanese like to paint their bridges in blue or red. THis was apparently a brand-new one.

“Warum ist es am Rhein so schön?”
My ryokan is situated on the upper left corner.

I checked in and of course my first action was a walk to the onsen. The stench of my biking gear gets worse every day, when I open the wardrobe….you don’t want to know. As there was nobody inside, I took some pictures.

Washing place before you enter the pools.

I guess the water must be saturated with salts (iron sulphate/carbonate?), it is forming a rock landscape.

I took my time in the bath, it was still early. Even without my beauty case, it is easy to bring yourself in shape, a lot of items are provided in the changing room. 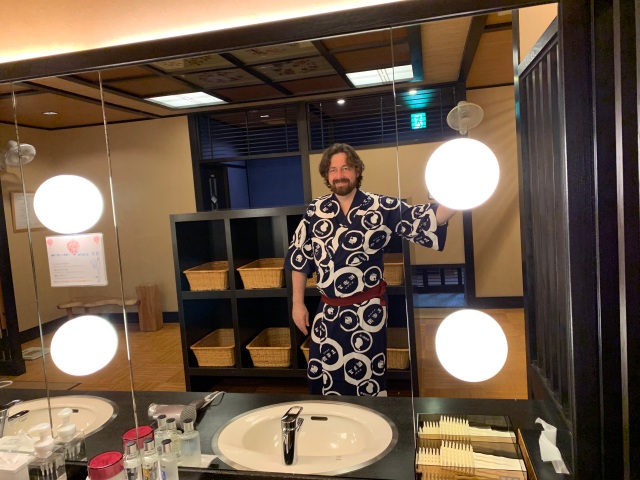 What can I say, the Kaizeki dinner was very good again, but I put only one picture after yesterday’s overload. 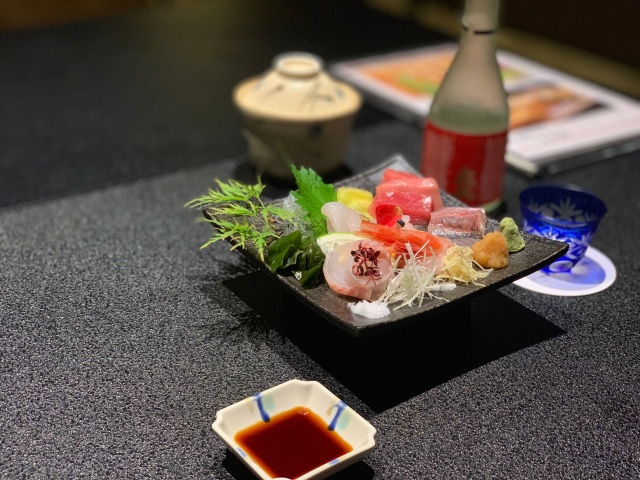 Japan is really ruining sashimi in Europe for me.

After dinner, I started to write the report, but at 10 p.m. I had to stop. The bathing and the dinner (and the sake?) did their job and put me to bed.