The IBR riders have reached the second checkpoint hotel in Tennessee in some extremely bad weather. By this time, they have already left the checkpoint, starting Leg 3 to end the rally back in Albuquerque.

In 2013, the morning rider meeting was similar to the one of the first leg, but Tom Austin made a surprising announcement: to be a finisher of the Ironbutt Rally 2013, you needed to have at least 60.000 points! I had expected a threshold of only 45.000. That was a huge blow to my aspirations to become a finisher. I checked the standings: I dropped from 36th to 74th place (out of 90 riders that were still in the game). The reason was that I missed the huge points (>8000) from Pikes Peak. The ranking was not the problem: I had 30362 points at that moment which meant that I needed almost another 30000 points! My hopes were that I could choose a northern route back to Pittsburgh to avoid the heat in the south. I had followed John’s advice to cut the lower part of the fairing to prevent overheating, but still I preferred to avoid the big heat. When I checked the rally book for Leg 3, I learned very quickly that the northern route via San Francisco and Vancouver would not give me enough points. In a frustrated mood, I built a southern route that would give me enough points, but would be difficult to arrive in time: 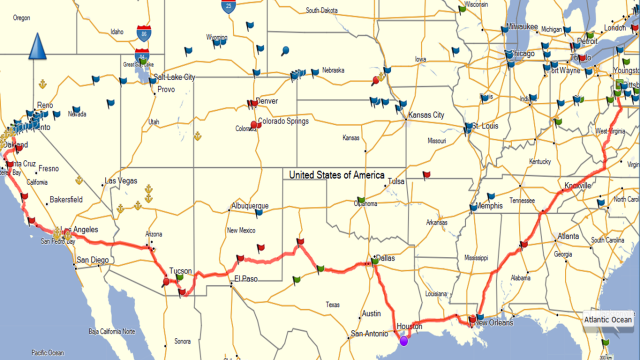 I needed to go down to New Orleans and it was clear that a similar effort like in Leg 2 would necessary to achieve this goal.

In retrospect, I made a a horrible mistake in my planning: in order to speed up the selection of locations in the GPS program, I took all locations from all three legs and deleted the locations from leg 1 and leg 2. As a result, I would have all the locations from Leg 3, wouldn’t I? It did not come to my mind that point from Leg 1 or 2 would be re-used in Leg 3 with a higher point value. This error I will never commit again.

All I needed was to leave. It was a nice and sunny morning with moderate temperatures (the previous afternoon had been very hot). In the parking I changed some words with a spectator that was interested in my bike. I mentioned that I should have got me lighter gloves for such a hot climate – he said “wait a minute”, went to his car and came back with some used DIY gloves. He insisted that I should use them instead my warm leather gloves. Thanks, mate! I still have the gloves.

I left the checkpoint at 8:45 a.m. Los Angeles, here I come! My plan was to bag four big bonuses going south in California. I was riding on a freeway with a 60 mph limit in some congested traffic, when suddenly Giel Kerkhof passed me. In the US, filtering/lane splitting is forbidden, except in California. I remembered this now and I thought “it’s still cool, let’s have some fun!” and tried to follow Giel. His huge Harley zoomed through the line of cars and I tried to follow. Not an easy task, but I managed. This was indeed fun and lasted about 20 minutes when we needed to take an exit. When we went on a ramp, I wanted to switch down gears, but I couldn’t! What was this? I managed to get over the ramp with a sliding clutch, but then I had to stop next to the road. The fifth gear would not move. Yes, this has been a quick ride, but not faster than usual and the temperature was still moderate…I couldn’t shift the gears any more.

There comes a moment when you know: “that’s it. It’s over.”

I knew that the rally stopped here. I would not be a finisher of the Ironbutt Rally 2013.

But there was no time to be disappointed. My brain switched directly from “rally” to “survival” mode. I had to fix this. How could I do this? Where’s the next Honda garage? I asked two guys with a pick up truck who told me an address. Later they even offered me to take the bike there after they had delivered something. I tried to shift gears again. BANG! Fourth gear! It worked! BANG! Third! BANG! Second! First! Hmmm, maybe the thing healed itself? (Desperate escapism, isn’t it?). I wanted to give it a try…after 1 km, I stopped again…the first three gears worked, but I could not engage the fourth one. All right, that’s that. I made some phone calls and informed my lady at home and Lisa the rally master. I wanted to go back to Sacramento to find a garage. With MJ’s help, I planned to go to a dealer on the way back. Lisa had warned me that on Monday, dealers would be closed.

I went back to the freeway and rode in third gear to that address. Of course, it was closed. What now? Let’s go back to the rally hotel…John responded to my text message and phoned me, so I pulled over and talked to him. I never will forget the moment when a motorbike cop stopped next to me, his facial expression motionless behind his aviator sunglasses…”John, wait a second, there’s an officer that wants to talk to me….yes, Sir?”

“Is there a problem?”

I was afraid I had broken some unknown law by phoning on a bike on the side walk, but apparently I didn’t, for he rode off not without giving me this “I’ll remember your face, boy” look. So I went back north to Sacramento. In third gear. The rally was basically over for me, but that was not the problem at the moment. The problem was not to get back to Pittsburgh, the problem was to be at Toronto airport in seven days! That was my goal now. What would I do if the bike would break down? A 27 year old bike that was never sold in the US? Even if I would find an open garage, what could they do? Was this caused by overheating? Well, the rally was definitely over, I would not dare to cross the Mojave desert with this problem.  And there weren’t enough bonus points on the way back to the finish. So Toronto airport became my objective. What’s the direct route? 2500 miles (4000 km)…six days and nights….if I would go in third gear, I could do at 70 km/h (43 mph)…that would be tedious, but possible. Crazy, though. But what options did I have? I needed to take that plane, or otherwise I’d be confronted with a massive financial and logistic disaster. Maybe I should try the fourth gear?….I tried it, but the fourth gear wouldn’t stay in it’s position….until it worked! The fifth, gear, however, would not remain in its position. But at least my riding speed was increased to 100 km/h (63 mph)!

Some minutes later, I tried the fifth gear again, and after some jiggling, the fifth gear stayed in it’s position! Yes! Let’s roll. But when I had to switch down gears with some terrible noise, it was difficult to install the fourth and firth gear again. But this was less of a problem: after Sacramento, I turned eastbound on the I-80 again: the sat nav made a distance calculation to Pittsburgh I’ll never forget: “follow the road for 2489 miles”.

I went back on the road that I came from the day before. Up in the mountains, I took one of the few pictures on the way back. 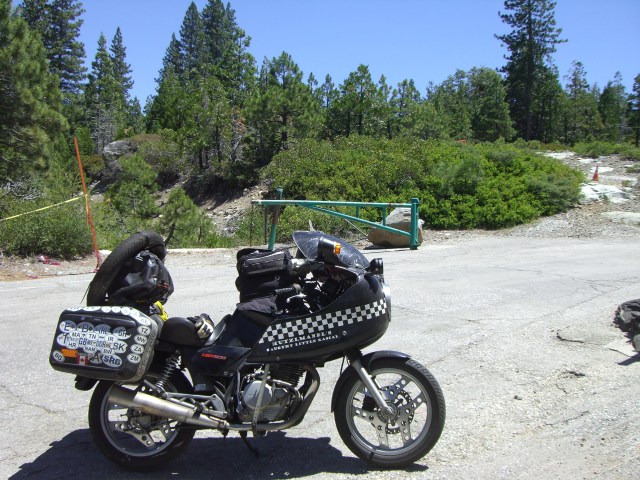 On my way through Nevada, I had a lot of time to think. I went at some 65-70 mph (105-112 km/h) as I was not in a hurry any more. What had happened? I still have no answer. Gear box problems of XBRs are basically unheard of. Well, my first gear box lasted 232.000 km (144.000 mls) until the second gear died. I had expected that something similar would happen one day to this gear box as well. Since I had placed it, it never had the smoothness of normal gear boxes and lately, the second gear would jump out a little bit too often. But problems with fifth AND fourth gear, out of the blue?? That doesn’t make sense. Was I riding too hard? Not really, I was going faster than usually during the rally, but in Europe, I ride a lot harder than that. The temperature was still cool in the morning, so overheating is unlikely, the oil temperature was hot, but in a normal range. I categorised this as “simply bad luck”.

The gearbox was tricky to use, but slowly I learned to engage the fourth and fifth gear. The bitter thing is: the bike made it back, and I was riding it a couple of thousand kilometres in Europe afterwards. I still haven’t replaced it to this day. It’s tricky to shift gears, but it’s possible. Should I have tried to continue the rally? In retrospect: yes! But you have to assess the situation always under the light of the moment. I had taken the right decision. Would this rally have taken place in Europa, I would have risked it. But not on a different continent.

So I went slow, but steady and at half an hour past midnight, I arrived again at the Hampton Inn in Salt Lake City. The lady at the desk was surprised again. “You’re back? from Sacramento??”. This time, I was not in a hurry, I did not set the alarm clock….

On that day, I was mentioned in the Bob Higdon’s daily bulletin of the rally: “Robert Koeber lost the top gear in his Honda XBR500. Since his initial report we have heard nothing further from him. Something makes me believe he has an international following. I got an e-mail today from a fan of his in Sweden.” Unless you are a top rider, it’s usually not desirable to appear in Higdon’s brilliant reports. It means something unlucky, terribly stupid or very embarrassing has happened to you.