Starting Leg 2 or changing a tyre can be challenging…

The riders have left for the second checkpoint in Tennessee. But that’s not it; many bonus point locations need to be visited. After all, this is not a flower-sniffin’ trip. From now on, the real thing starts. Leg 1 was just a warm-up. The mental and physical stress will slowly come creeping in during this leg…

I woke up at 5 a.m. and I knew immediately that this was not a good night. I should have rested well, but instead I got only very little sleep. I shambled to the breakfast room where the riders were already under tension. An atmosphere full of energy. I talked to Bob Lilley at the table and learned that we had done the same distance – except that he did it in miles, not in kilometres! Very soon some announcements were made and President Mike Kneebone announced the standings of the first ten riders.

We had received the rally books for Leg 2 and everybody rushed to their rooms to start the planning. In contrast to Leg 1, the planning for Leg 2 had to be done while the rally clock was ticking! On the way out, the standing after Leg 1 were provided on some lists. Everybody needed to have a quick look…I expected myself to be in the lower quarter, as I deliberately had chosen to ride a very relaxed Leg 1 and to get a lot of sleep before I would start the challenging Leg 2. And anyway, I was not compatitive; with this small bike in the “Hopeless Class”…I couldn’t find my name…. I looked higher in the ranking and there I saw it…place 36! 36! Out of 94! That was a nice surprise! But this leg was more the “European type” part of the rally, the next two legs would include more riding on long highways, with increasing speed limits from 65 mph to 70 to 75 mph. But anyway, this was reassuring.

I started the planning in my room. The basic route was from Pittsburgh, PA to Sacramento, CA. Some gruelling 2500 miles (4000 km) and only 64 hours to go…And this did not include the stops, visiting the bonus locations, rest breaks…I picked some bonuses along the basic route. I knew I had some points buffer from the first leg, but for it was also challenging to reach the minimum points in the end to be classified as a finisher. The biggest chunk of points was going to the top of the notorious Pikes Peak. A massive amount of points could be earned here. In retrospect, I am not sure if I took a wrong decision here, but at that moment, it just seemed right. I decided not to get there. Firstly, I thought it would be too far away from my route and cost me too much time: the way to the top, taking the picture of the cable car, all the way down…remember, I was under time pressure anyway. I overestimated the distance from my basic route, it wouldn’t have been very far from it. Definitely less than I thought. Secondly, and this was maybe seemed more important to me in that moment, the altitude was tremendous: a (literally) breath-taking 4267 m! The road started at 2800 m, that’s the altitude of the highest pass in Europe (Col de la Bonette). There, the XBR has lost a lot of its power, coughing its way up to the top. How it would react at 4000 m? I preferred not to know. So I left Pikes Peak out. Today I think that I should have given it a try, but the prime objective for me was to play it safe and to arrive at the finish. 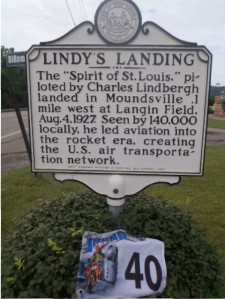 My first stop was in Moundsville, West Virginia. It was the place that Charles Lindbergh visited after his Atlantic crossing and where he was welcomed by 140.000 spectators. I arrived after one hour and was surprised that two spectators were already waiting there and welcomed me. As I said, the IBR is a big thing in the US. After I had taken my picture, I had an idea. Why not asking them if they knew a place to change a tyre? So I asked one of them and they considered the options. The other one rode a Gold Wing and knew a Honda dealer and was convinced by the first rider to escort me there. What I didn’t know at that point was that the first rider was nobody else than the famous LD rider Robert “Hoagy” Carmichael, founder of the “Hoagy’s Heroes” charity organisation.

I followed the other rider who brought me to the Honda dealer and explained my situation to the shop assistant. OK, they agreed to change the tyre immediately. Yes! YES! I thanked the Gold Wing biker and had high hopes that I would be back on the road very soon, probably in half an hour. Weeeell….it went slow….veeeery slow. The mechanic worked in a kind of slow motion way. I had time to call home and explain the situation and I also informed John to stop searching for a garage. In the end, I helped the clumsy mechanic because I could feel the time running away…when I got close to him, I could smell the reason why he was so slow. I had to watch out and lend him a hand so he didn’t drop my bike off the platform. Finally the tyre was changed and after one hour, I was back in the saddle. One HOUR! I hand only 58 hours left and 2450 miles (3950 km) to go! The challenge got just bigger and bigger….

Two hours later I arrived at the Motorcycle Hall of Fame Museum in Pickerington, next to the I-70. I was lucky: I didn’t have to look for an old BMW in the museum, I just needed the printed confirmation that it was temporarily not on display. I went back on the highway and turned south-west. I took my picture of the old boat museum at the Ohio River, right on the border between Kentucky and Ohio. Before, I had enjoyed some small bends and showed another rally rider what a little XBR is capable of, hehe. Unfortunately, most roads are different there… I spotted a fuel station and decided to fill up the bike and the rider. In the station, some delicious fried chicken was offered and I did not miss that chance, who knows when I could get some hot meal the next time.

I crossed Cincinnati and entered Indiana. At a moment when I was riding at 80 mph (130 km/h), I was passed by Bob Lilley who gave me thumbs up when he spotted me. This showed me clearly that the XBR could easily keep up with the low speed limits and beyond, but played in a different league than the cracks. I passed Indianapolis. Hello Illinois! The weather was fine, the XBR hummed and I was making good progress. I continued on the I-70 again and by 8 p.m., I crossed the Mississippi in the light of the setting sun. There are moments in your riding life when a picture is carved into your memory. This was one of them. “I’m a poor lonesome cowboy, and a long way from home…” I felt like Lucky Luke on his Jolly Jumper. 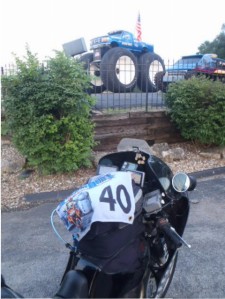 I had to take a picture of a monster truck in St. Louis and of a train. The latter was in a museum that was already closed but I spotted it and with my zoom lens I could take a picture before it got too dark. I had to fill up the bike again. Well, again…with my auxiliary tank, I had now a range of 600 – 700 km (370 mls – 440 mls). That’s quite impressive. So I planned to stop for petrol and have some food before I would start my long night shift riding through Kansas. Due to the many hours lost already on that day, I decided not to stop at a hotel yet, but to try to ride as long as possible. But first I bought some snacks in the station and munched them in the cool building. When I spotted the name of the station attendant, I needed to ask him where he was from. And indeed, as I had supposed, he was an immigrant from Iran. The next 15 minutes, while munching and choking my dinner, I told him of my trip through Iran 5 years earlier. This was a surreal, but funny situation: there were a German and an Iranian in a gas station in St. Louis, Missouri, discussing my trip through Iran and the general situation there, while the Americans were paying their fuel. Another memorable moment.

I was ready for the next challenge. It was 10 p.m. and I started my ride into the dark of the Kansas plains…my first real riding after midnight in America…how far would I get before I needed to stop for sleep?