Yesterday I returned home from my fourth scouting trip during a hot day and I was too lazy for a write-up of my second day in the IBR 2013. Hell, I thought, I’m not in a rally, so relax. The guys that are riding on the third day will probably still be in a good mood, circumstances permitting.

As I now have access to pictures and the internet, I want to provide some pictures before and at the start that I couldn’t access during my trip in the Alps.

Here is a professional picture where I just started the odometer check trip on the day before the start. Note the tyre. 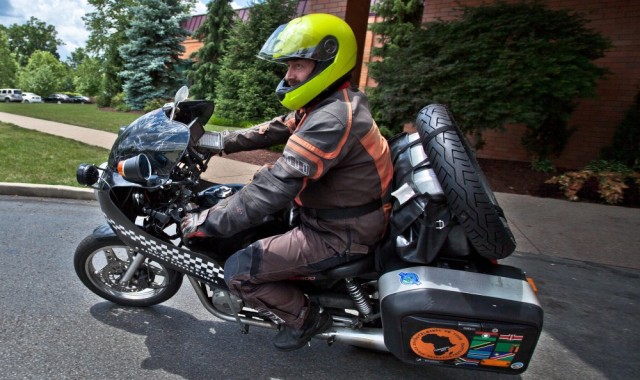 It is funny, but the IBR is a big thing in America and gets a lot of attention. It’s no surprise that later I discovered a picture of me at the start of the rally: 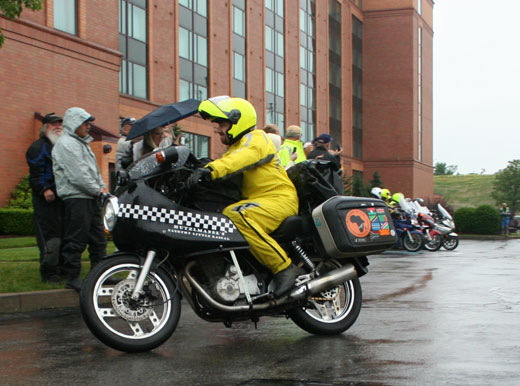 After half an hour, I passed Kevin and Lyn Weller, I didn’t expect that Lyn would take pictures in the rain. If I had known, I’d have sucked in my stomach! 🙂

After a couple of hours, I woke up on day 2 and left before sunrise. I had a luxury 7 hour rest break near Burlington. In IBR terms, this was a huge break. But as I said, I took it easy during leg 1 for the leg 2 would be quite the opposite. I set off east, passing Montpelier and Berlin (wait – was I really in the US?) until I finally arrived at an old cog railway called “Old Peppersass” that was the first mountain climbing cog railway engine in the world. I took my picture and moved north. The crossing into Canada posed no problem and soon I could remove my rain suit, the wet weather was over. By midday, I reached the Montreal – Québec Highway that I drove on a week ago when we had spent some holidays in Canada. Familiar territory, so to say. I passed Québec City and needed to switch from my auxiliary tank to my normal tank. And there it was again – the stuttering that had haunted me during the Brit Butt Rally and also on the way to Pittsburgh! I had not found the root cause for this, but for the next two days, it appeared occasionally again and limited my top speed. Luckily I was in Canada where the speed limit is only at 100 km/h. But it is quite nerve-wrecking. I stopped at an old fuel station and realised that I was in the French-speaking area again. If only the Québécois accent would be easier to understand! The weather was sunny now and I reached my most eastern points in the rally along the St Lawrence River. First it was a ship and secondly a sign of a motorbike museum.

The ride was enjoyable now and I needed to go back and past Montreal. However, I got stuck in the rush hour in Montreal. Oh, dear! I was relieved when I finally could ride on the “deserted” highway towards Ottawa. Before reaching Ottawa, I had to turn westwards again. It was already in the evening and I wanted to reach a location in a small village called Merrickville before sunset. When I got there, I met another female rider. There’s no time for a chat, so it’s about taking a picture and get on the bike again. An elderly man tried to start a conversation with me and when he heard where I was from, he said:”Oh, my wife speaks German!”. He called her and it turned out that she had immigrated from Germany some decades ago. I would have been nice to chat a bit more, but I needed to move on. There was another reason why I wanted to leave: the next stretch of about 200 km would lead me through a forest area on a small road and I had a lot of respect for the wildlife that could cross the road. On top, it soon got pitch black very soon and myriads of flies covered my visor. I did not dare to wipe them away for I expected them to turn into an ugly slime. My LEDs light on the XBR were not the brightest, but I trusted in my Krista lights that I had bought for a bunch of money. However, there was a bad contact: instead illuminating the road, they merely flickered! Great! These 3 hours required all my attention for I expected to see a deer on the road at any time. Finally I checked in a hotel in Peterborough before midnight where I had a 5 hour rest break.

Canadian Canoe Museum. There’s a museum for everything.

In the morning, I started with high hopes into day number three. It was a lovely sunny morning and things were moving well. I took a picture of the Canadian Canoe museum right in Peterborough rode towards a location where I took a picture of a plaque in honour of Robert McLaughlin, the founder of the McLaughlin Motor Company that later turned into General Motors. What a nice morning it was! Canadian countryside, no traffic, morning sun…until at 6:30, on the Regional 57 Road, near a farm in the middle of nowhere….the XBR did not advance any more!

What the…???….It took only 2 seconds to realise that the throttle cable was ripped! Well I was carrying a repair kit…..no I wasn’t! I followed the advice in the rookie meeting: “leave half of your luggage here. You won’t need it!”. Yeah. Until you REALLY need it. Fantastic! A little problem, a huge consequence. How to fix that without a new cable? Far from a town? Think! THINK! And in the back of the head, the rally clock is ticking….

Then I had an idea. It was the opening (main) cable that was destroyed, but the closing cable was intact. And you don’t really need that one…so let’s cannibalise it! Problem was that I could not unscrew one screw with my tools. I don’t remember what I did exactly, but I resisted the emerging panic and worked a way around it. And the clock was ticking. I could finally remove the cables and reverse their order. The closing cable did not fit very well and had a tremendous play in the throttle, but I could ride again! After one hour, I was back on the road. What did I write earlier? Frustration and euphoria – they can be so close.

On my way north, I visited the Trent-Severn Waterway and the Big Chute boat lift in…Big Chute. Very well. The riding was a bit odd with the wrong cable, but it worked. I started to get an idea what had happened. I was almost losing the rubber of my throttle from time to time. This was a consequence of spraying some silicone on the handlebar to push the rubber it. However, some water had entered during the rain on my way to Pittsburgh and “lubricated” the throttle rubber. While riding, I pushed back the rubber by closing the throttle. By doing this, I also buckled the throttle cable and in the end it wore too much. Lesson learned.

In the meantime, I had discovered “Beef Jerky”, the dried meat which could be eaten quickly at a fuel stop. And you can continue riding with a mouthful of meat, slowly chewing like a cow….The petrol problem came back and prevented me from breaking the low speed limit. Very annoying. My next location was far up north. I surrounded Lake Huron and arrived in the afternoon in Sault Sainte Marie, an important crossing at the border to Michigan/USA. I pulled some petrol and I was flabbergasted when I saw the interior of the station: anything you could possibly need in the wildlife was available to purchase there. AND a slice of hot pizza! Mmmmh…it was not comparable with a real pizza from Napoli, but it was the first hot meal in three days. I went further north until I reached a memorial plaque at the Batchawana Bay of the Lake Superior. The views were spectacular. But no, no time to take touristic pictures. I planned to enter the US on the same day. I went back to Sault Saint Marie and took a picture of the plane in front of the bushplane museum. After that I crossed the large bridge over the St Marys River. A long queue awaited me at the border control. Better do not jump the queue here…When it was my turn, I answered the questions of the border officer. I had realised that the naked truth is the easiest way: a participation in a motorbike rally sounds rather credible, despite my looks. When I was asked “Where you’re from?” I spotted the name tag on the officer’s uniform: Vogt. A good old German name. No wonder that the process was finished quickly.

My last picture for the day was the huge Mackinac Bridge over the Lake Huron o the left and the Lake Michigan to the right. Very windy there. I checked where I wanted to stop for the night. I had to be in Detroit the next morning, so I could take it rather easy. Finally I stopped in Saginaw for the night and had a long, extra-points-collecting 8 hour rest break. One more day, and I would be back in Pittsburgh after a successful Leg 1.