Transport of bike and rider – welcome to Canada!

Soooo, I had no time to write during the last days…or I was just too lazy :-). I’m in Montreal, Canada now and things are on track. But what happened during the last days?
As the requirements for the transport of the bike say that the bike has to be clean for the shipment and I know that Canadian customs authorities are very picky when it comes to bugs or dirt on the bike, I decided not to ride myself to Paris, but to rent a truck and to deliver the bike with it. So I did. I borrow some wooden planks from a friend and manage to push the bike myself in the enormous Mercedes Sprinter. I went to a village north of the Paris airport where I had booked a little room. The area was gastronomic wasteland and so I had to deal with an ‘Italian’ restaurant that set new limits….on the lower end. The next morning, I went to the cargo area of CDG and I presented myself at the shipper office. To my surprise, everything was finished after 30 min, they even went to customs for me. I only had to drive to the warehouse and to drop off the bike. This could have been also very quick, but the inspector had some problem with the weight that the company had put on the dangerous goods form and the paper had to be printed again in the office which took some time. but in the end the whole process was very quick and professional. I could start my return trip, putting the pedal to the metal. Quite a good truck, this Sprinter. When I had left the day before, Heinz had called and had asked me one question:”very nice, the cut fairing. But where are the vertical forced now going to?” And suddenly I realised that by cutting the fairing, I lost also the lower holders that gave a lot of support to the whole construction. And this was gone now. This meant that most of the weight is carried by the small bars in the cockpit – bound to break. I passed by Heinz and I returned with some iron bars that I planned to put between the fairing and the older lower holders – something to be done in Canada. Another last-minute task. At home, I had to start to pack my things – very late! But in the end, everything was ready: divided into the luggage for the rally and for the vacation. MJ and I will pass a couple of days in Canada, touring around with a rental car.

Finally, the big day was there and we took the plane from Düsseldorf to Toronto. apart from a very windy landing (woooops!), a regular flight. Surprising how the manufacturers of the stewardess puppets manage to give them this human touch. At the border control, the welcome was not particularly very warm and, treating me like suspect and not like a guest. Dropping the luggage at the hotel and taking a taxi to the cargo airport. I hoped that this would be as quick as in Paris but I soon learned that this was asking too much. I got my papers from the warehouse, but I had to pass customs. How to get there? Oh, it’s at the other end of the airport, you need a taxi. 33$ later, I arrived there and told the cab driver to wait because I didn’t to call and wait for another taxi. The customs official also had an interrogative style in the beginning.  The best moment was:

“why are you staying such a short period?” ” Because I do not have more holidays” “But you guys do have three months of vacation, don’t you?” “Three months??? I wish I’d had…”

I was explained that the inspector had to go to the warehouse and to check the bike first. After an hour, the official explained the paper documents and told me that he had helped me because he had convinced his boss to give me the paper already now and not in one or two days (!!!). Incredible. 50$ customs fees and I finally could leave after more than one hour. The meter in the taxi seemed to be glowing due to overheating 😉 I had to pass by the hotel and grab a tool I had forgotten and finally I was back at the warehouse. The taxi fee was astronomic. Some paperwork later and 80 $ later, they delivered the bike at the gate and I helped to untie it in the crate. 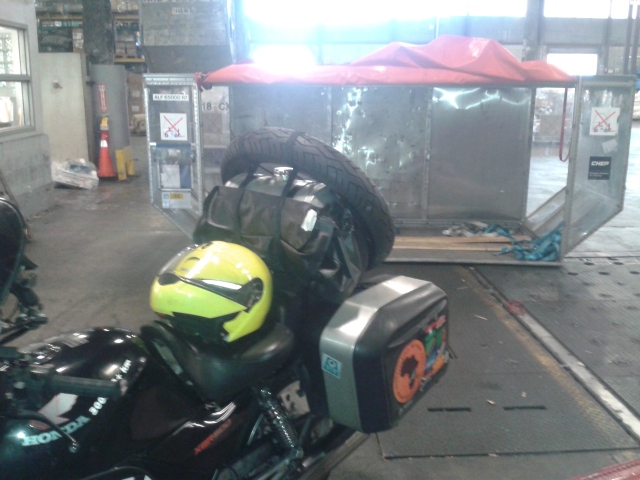 Pick up in the warehouse

OK, just connect the battery and let’s get back to the hotel. The starter turned, but the motor wouldn’t start! I tried for a couple of minutes, but no success. I felt some panic coming around the corner. What now?? Let’s try a jump start. I pushed the bike up the ramp….and realised that the kill switch was pushed a little bit. Argh! The bike started immediately. How embarrassing!

Back in the hotel I made an arrangement that I could leave the bike for the next week in the parking.

The next morning, I fixed the two prepared bars to the fairing, drilling holes in the fairing…manually! 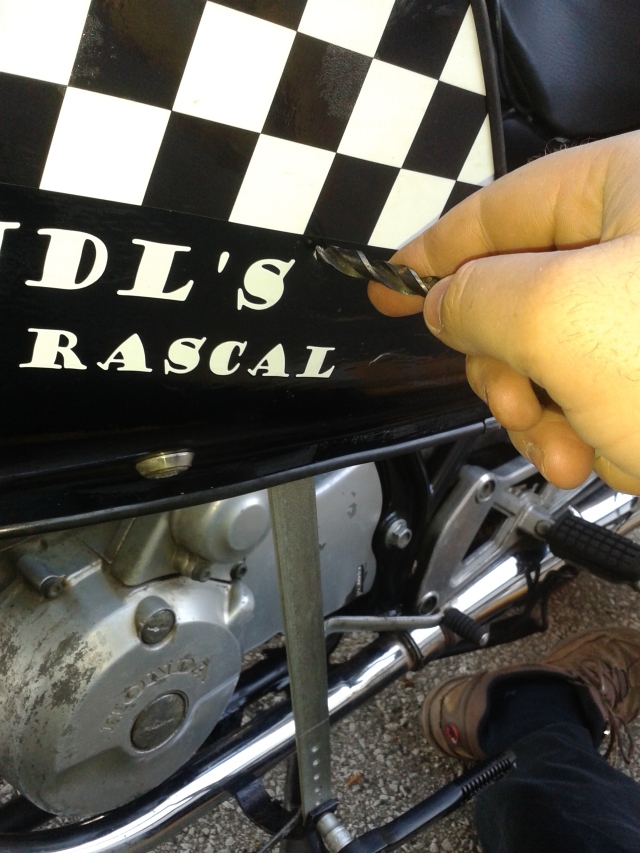 Heinz had also prepared me for that, making a hand drill. 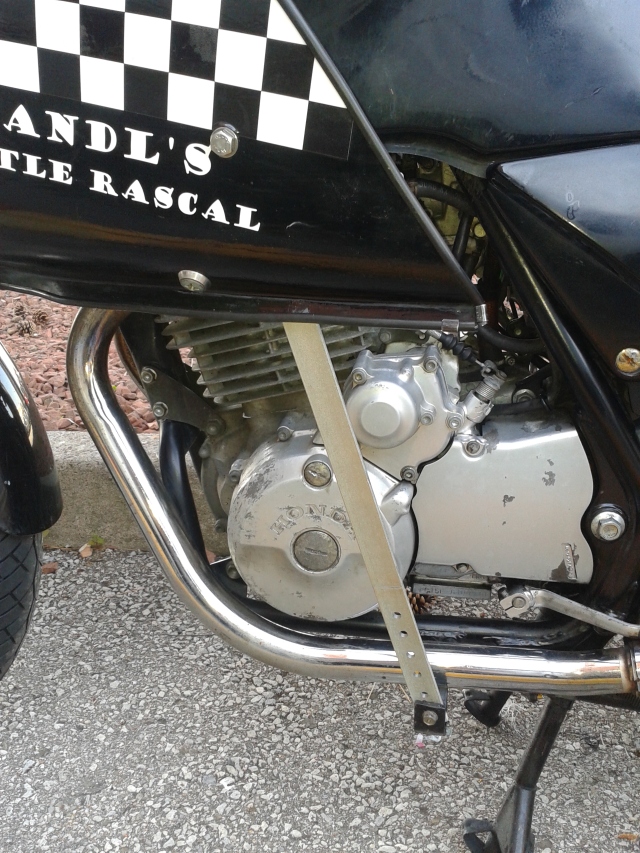 …but the result counts. Not made to win a design prize, but form follows function.

After less than one hour, the work was finished and I feel relieved now, the fairing should be stable again now.

I picked up the rental car and we Toronto eastwards, heading for Montreal. Straight highways with 100 km/h speed limit…my daily business during the next weeks. We made a quick stop in Kingston, the former capital of Canada with some historical buildings. 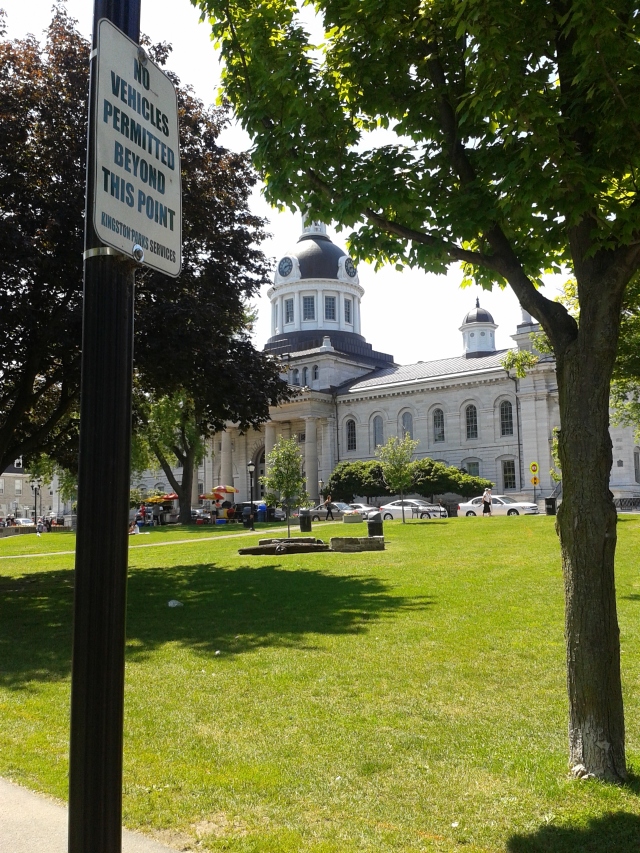 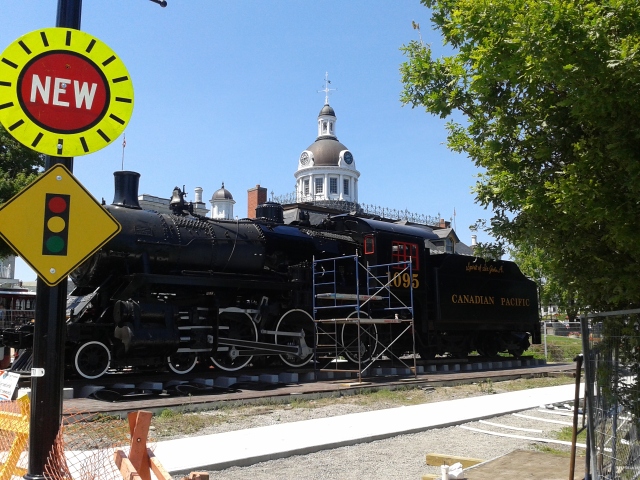 Now I might not be very familiar with Canadian engineering, but I would have thought that this artefact is from a past century…

In the evening we arrived at our hotel near Montreal and talking to the concierge at the reception I realised that Québecois is different from the French spoken in France. A totally different accent. At the dinner, I was so jet-lagged that I hardly could keep my eyes open. At first sight, this looks very much European than in the Ontario province. Next task: visit Montreal.

7 Comments on “Transport of bike and rider – welcome to Canada!”