After 2013, this is my second attempt to become a finisher of the notorious Iron Butt Rally, the toughest long-distance motorcycle rally in the world. I will leave on Monday morning, 26th June from Minneapolis and will return 11 days later, after some 11.000 gruelling miles, having seen many corners of North America. This time, I start this adventure with a “proper bike”, i.e. the Honda ST1100 Pan European. I bought it in 2014 for very little money with the purpose to ride the Iron Butt Rally 2015, but in the end I cancelled my participation back then.

The bike is optimised for long distance rallying and has an impeccable track record: out of nine rallies since 2015, it came second once and won all the rest of them. A good recommendation for the Iron Butt Rally. In the last months, I optimised many features and spent a lot of money to revamp the bike. With support from Mart!n, Bavaria’s best motorbike mechanic, the bike got a complete make-over: a new (almost new) motor, a new drive shaft, refurbished alternator, new brake discs with brake pads and refurbished pistons, new water pump, new wheel bearings, refurbished fork, steering bearing, a new cruise control, and and and….not to mention all the improvements (farkles) I had installed earlier: the highest wind shield, a day-long Russell seat, a new, smaller auxiliary tank, handle bar risers, heated gear, improved suspension, 14000 lumen LED headlights, 15000 lumen auxiliary Clearwater LED flood lights….

I will write more before the start of the rally, but I want to take the opportunity to introduce my back-up writer for the duration of the rally: my friend Mr John Young, probably the fiercest Triumph fanatic east and west of the Mississippi. He did the blogging four years ago during my first Iron Butt Rally. I will be banned from social media during the rally so he will keep you updated on my adventures. Knowing John, this could be quite entertaining… 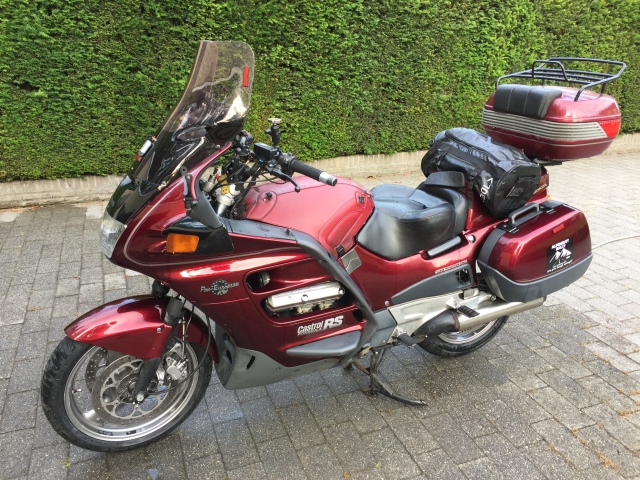 One Comment on “Unfinished business – riding the Iron Butt Rally 2017”